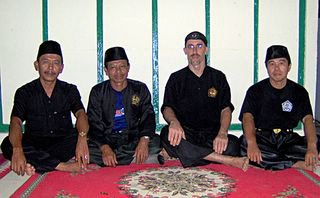 My good friend of many years Guru Gorka Echarri of Biarretz, France is the French Director of the Cimande system of Pencak Silat under the auspices of Persatuan Pendekar Persilatan Seni Budaya Banten in West Java.

The Cimande system is one of most prolific, yet misunderstood systems of Pencak Silat from Java. Wild misconceptions about this art abound, especially in the United States. I admire Guru Echarri for taking the initiative to go directly to the source in Indonesia for the Truth. I invite all French speakers to visit his impressive website at

Gorka is very fluent in English, and I'm sure he would be happy to answer any questions from those seeking knowledge of authentic Cimande and Terumbu as practiced in Indonesia. For the record, let me just say that there is NO "Leader" or "Guru Besar" of all Cimande styles - especially not in the United States. There are various lineages of Cimande from the late Pak Herman Suwanda and others. There is also no single "Superior" or "Legitimate" Cimande style even in Indonesia. Just like any other martial art, there are different interpretations, each with its own merit.

As they say in France, "Vive la diference!"
Posted by guro jeff davidson at 10:41 AM

Hi Jeff,
Thanks a lot for this add to your great blog.
I really feel honored and proud to deserve the right to be on your blog. Your comments about my path are really nice and it shows me that I'm on the correct way in the the quest of traditional pencak silat from west Java.
Thanks for everything
and as they say in Indonesia :
"BHINNEKA TUNGGAL IKA"
"unity in diversity"

How can I not acknowledge your astounding accomplishments? I look forward to learning more of the Cimande and Terumbu from you.

However, you and I MUST give recognition to the one person who really did so much for us in our mutual pursuit of knowledge...and without whose help, none of this would have been possible.

You're still the best Cimande in Michigan and I have always been proud to call you my teacher.

I'm glad I got to meet Guru Echarri in Michigan a few years back. He's a great guy and a really talented artist and Cimande player. When can we go to France Guru?

Maybe sooner than you think, Bobby.

You''ll always be welcome for Cimande and Terumbu training (or just for good time) in France.

Its freezing here in Michigan. I would KILL to be back on the beaches of Biarritz right now!

I look forward to giving you some good news on Wednesday, Bro.

I met you a long time ago in Michigan at guru Jeff's old school. I was so happy to see your website and your accomplishments in Silat. Can you please tell us a little about your training in Indonesia with the teachers there?