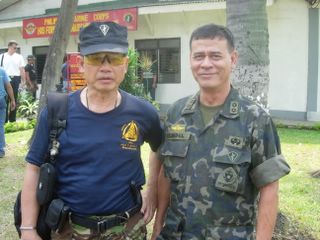 
A more detailed article on Pekiti Tirsia’s relationship with the U.S. and Philippine Military is presented in the article below from www.pt-go.com Experts from the following branches of the Armed Forces agree that Pekiti Tirsia is the best option for personal and national security!

1998 was a historical landmark year for the Pekiti-Tirsia system in the Philippines. In the history of the Armed Forces of the Philippines, Pekiti-Tirsia was to be the first authentic Filipino combat system and martial art adopted as official warfighting doctrine. For three years previous, the Force Reconnaissance Battalion of the Philippine Marine Corps researched the different Filipino combat systems/martial arts being practiced in the Philippines to specifically find the knowledge and essence of Bladed weapons combat. The marines of the Force Recon Battalion completed several combat skills courses and interviewed numerous instructors, but found none that taught combat with the live blade and that could teach a system to special operations forces applicable to their operational environment and requirements. Combat marines and soldiers are armed with an array of edged weapons including the bayonet, bolo, entrenching tool, fighting knife, and the multitude of improvised weapons found on the battlefield. As the recognized elite of the elite, the Force Recon Marines sought to set the standard for skill and instruction in close quarters combat. The battalion commanding officer, Major Natalio C. Ecarma, met with Mataas na Guro Tim Waid who had been residing in the Philippines and training with Grand Tuhon Gaje since 1993. As the Director of SURVIVAL EDGE SYSTEMS / Pekiti-Tirsia Tactical Training Institute, and himself a former marine, Guro Waid introduced the unit to the history, training methodologies, and effectiveness of the combat bladefighting system of Pekiti-Tirsia Kali. Guro Waid detailed the unparalleled, international professional recognition that Grand Tuhon Leo T. Gaje had brought to the field of military and law enforcement tactical training and demonstrated the use and employment of combat edged weaponry carried by operators on special operations missions. Guro Waid conducted an intensive six-month instructor’s candidate course in the Military Edged-Impact Weapon System for Close Quarters Combat/CQC graduating thirty (30) students in June of 1998.

The Force Recon Marines have reinstituted and revitalized the historical use of authentic Filipino Bladefighting technology within the Armed Forces of the Philippines (AFP). Today, they are recognized as the leaders and subject matter experts (SME) in the use of Edged-Impact Weapon Strategy and Tactics within the AFP and now train all foreign special operations forces and ground force military units conducting joint training exercises and combat operations against insurgents and terrorists groups in the Philippines. Since 1998 they have proven the superiority of the Pekiti-Tirsia system against other military close quarter combative methods including the US Marine Corps Martial Art Program (MCMAP), SCARS method of US Navy SEALS, and the LINE method of US Army Special Forces. As in yesteryear when the Filipino instructed famous US military units of WWII including the Marine Raiders, Army Alamo Scouts, and led a successful guerrilla warfare campaign against the Japanese invaders by battalions armed with the Bolo, the Filipino fighting man is again recognized as the military Master of the Blade.

The Heritage of the Past and the Legacy of the Future

Article first appeared in the November 1998 issue of Citemar6. Official publication of the Philippine Marine Corps.

In this year of the Republic of the Philippines National Centennial Celebration, 1998, the Armed Forces of the Philippines (AFP) reclaims it true martial heritage with the Philippine Marine Corps Force Reconnaissance Battalion designation as the modern BOLO BATTALION. The Filipino Bolo has been the trademark combat weapon for generations of Filipino warriors and heroes from Datu Lapu Lapu to the founding fathers of the Katipunan and now of the Force Recon Marines. Today, the Force Reconnaissance Battalion is the only unit in the Armed Forces of the Philippines that trains, equips, and operates utilizing the traditional combat weapons, tactics, and skills of Kali. Kali, the true and authentic martial art of the Filipino is a systematic art of combat bladefighting based on the science of strategy and tactics.

The chronicles of Philippine history have recorded the victories of the Filipino Fighting Man in the defense of freedom, independence and democracy. Victories achieved by the use of the weapons and tactics of Kali. Kali prevailed against the finest European steel when Datu Lapu Lapu, the first Filipino hero, felled the famed Spanish conquistador Ferdinand Magellan in 1521. The Filipino Bolo was feared throughout the history of the Spanish occupation and the art of Kali brought many regional victories in the revolts against Spanish subjugation. Generals Artemio Ricarte, Gregorio Del Pilar, Antonio Luna, and other heroes of the revolution against Spain lead their troops to battle with Bolo in hand. The Bolo of Andres Bonifacio, hero of the Katipunan, symbolizes that gallant struggle that lead to the declaration of the first Philippine Republic. The American era brought respect for the fighting tenacity of the Filipino in such great measure that it influenced the adoption of the .45 Caliber automatic pistol for the U.S. Armed Forces. During World War II the American military recognized the superiority of Kali for close quarters combat. In 1942 the United States Marine Corps enlisted Filipinos to teach combat bladefighting with the knife, bayonet, and other hand-to-hand combat skills to the elite Marine Raider Battalions that spearheaded the war against the Japanese in the central Pacific. Most significantly, the First (1st) Filipino Regiment of the US Army became recognized as the original BOLO BATTALION. This unit, along with others such as the Philippine Scouts and other guerrilla units established the modern military legacy of Filipino Kali during the liberation of the Philippines when they fought blade to blade and blade to rifle and defeated the finest units of the Japanese Imperial Armed Forces armed and trained in the art of the Samurai.

From this heritage of the past the Marines of the Force Reconnaissance Battalion continue the Kali legacy of the future. The battalion, under the command of Major Natalio C. Ecarma III officially adopted the Pekiti-Tirsia Kali system as the unit’s formal doctrine for close quarters combat. Approved by the Commandant of the Philippine Marine Corps, Major General Ponciano S. Millena, the Pekiti-Tirsia Military EDGED-IMPACT WEAPON SYSTEM marks the first time in more than fifty years that the indigenous fighting art of Kali has been formulated for modern combat and officially recognized as tactical warfighting doctrine.

The Pekiti-Tirsia Military EDGED-IMPACT WEAPON SYSTEM is a combative skills program in Close Quarters Combat (CQC) tactical doctrine specifically formulated for military special operation forces. This system provides the operator complete strategies, tactics and skills for the use of combat weaponry in the entire operational continuum of modern combat from high intensity conventional war through the full spectrum of unconventional warfare.

The Military EDGED-IMPACT WEAPON SYSTEM/CQC parallels military combat doctrine to locate, close with and destroy the enemy by fire (Edged-Impact weaponry offensive and counter-offensive strikes) and maneuver (footwork and mobility) or repel the enemy’s assault by fire and close combat.

The Military EDGED-IMPACT WEAPON SYSTEM is comprised of:

Trained in this complete system of Close Quarters Combat/CQC and armed with the Combat Bolo, the Force Reconnaissance Battalion leads the Special Operations Forces of the Armed Forces of the Philippines in tactical operational capabilities. Tasked with the missions of conducting air, ground, and amphibious reconnaissance for the three Marine Brigades and Regional Commanders as well as direct action operations such as raids, counter-terrorism, and hostage rescue, all Force Reconnaissance Marines are qualified combat parachutists and divers and are graduates of the Force Reconnaissance Qualification Course, Army Special Forces Qualification Course, or the Scout Ranger School.

Presently, the Battalion is composed of a Headquarters and Service Company and three (3) Force Reconnaissance Companies, the 61st, 62nd, and 63rd. Each company is composed of three (3) recon platoons and one (1) sniper platoon. The battalion is headquartered at Marine Barracks, Naval Station, Fort Bonifacio in Metro Manila, where the H&S Company and two recon companies are stationed. Each company is deployed on a rotational basis to Cotabato City, Mindanao in support of the Second (2nd) Marine Brigade. The Philippine Marine Corps maintains the majority of their forces in Mindanao and the Sulu Sea due to their continued victories against the numerous enemy forces and organized criminal elements that remain active in this historically war torn region.

Today, the Marines of the Force Reconnaissance Battalion enter the arena of warfare trained in the strategy and tactics of Kali and armed with the Combat Bolo, the symbol of victory, heroism, and excellence of the Filipino Fighting Man.
Posted by guro jeff davidson at 12:58 PM 2 comments: