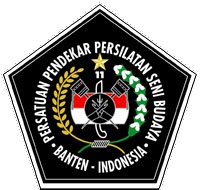 Sorry it took soooo long to make this announcement - and there's more to come - but we have officially joined one of the oldest and most respected martial arts Organizations in West Java:

Persatuan Pendekar Persilatan Seni Budaya Banten Indonesia
Our next posting will contain something of the history and mission of this venerable Society, as well as choice exerpts from the book written by its current President Hassan Chosib (translated by our own Mas Reno Notojardjo)...and our official ijazah, or letter or authorization. We are also pleased to add to our schedule of class two unique Arts: Cimande Macan Guling and Terumbu Gajah Putih.

Many people in the "Inner Circle" of Pekiti Tirsia are aware of the fact that this same Organization officially recognized our own Grand Tuhon Leo T. Gaje Jr. as a Master of Silat in his own right!

So thanks for your patience, and keep staying tuned!
Posted by guro jeff davidson at 5:47 PM 6 comments:

Guro Jun De Leon and the Problem with FMA in the U.S.A. 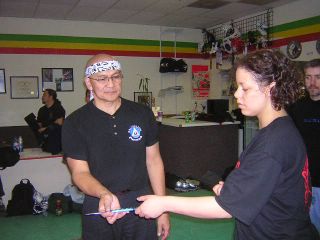 Try to imagine if you will, a leopard in human form. Smooth...relaxed....fluid...and incredibly explosive, the precise human equivalent of a jungle cat - with equal ferocity. Now imagine this human/leopard wielding double bastons, unleashing an utterly furious barrage of whirlwind attacks - with the sticks sounding like ‘light sabers’ from Star Wars as they cut the air...every cut precise and powerful enough to split you in half. The sticks move with such speed and such raw force that you feel intimidated even observing it from 10 feet away.

That is my impression of Guro Jun De Leon.

Kali De Leon is not a household name in FMA the way some systems have become. This is a calculated move, because Guro Jun was more than happy to keep a low, almost secretive profile for many years, until my own mentor Doug Marcaida convinced him to share his treasure with a select few worthy outsiders. Even so, he is certainly in no great rush to add to his student body. Guro Jun is more likely to ask a prospective student: "Give me a good reason why I should teach you anything" and the acceptable answer is not dollars (or whatever that funny-looking currency that they use is Canada is)

Anyone in the U.S. who has ever attended just one weekend FMA seminar has learned the drill commonly known as sinawali - also called ‘Heaven Six’ etc. They hunker down in the horse-stance, chopping and hacking the air (or their partners sticks) with all the grace and fluidity of an Oldsmobile with four flat tires. Even the majority of so-called advanced escrimadors, who can at least fake a reasonably fluid sayaw with solo baston, don’t understand even how to practice sinawali the correct way, let alone being able to fight with it. Its safe to say that most FMAer’s are equally deficient across the board when it comes to doble baston. Some have turned to ‘alien’ double stick methodologies from Thailand, for example, in their attempt to fill the gap of non-understanding so prevalent in the world of FMA.

Now, the speciality of Kali De Leon happens to be the double stick. Guro Doug Marcaida has been a student of Guro Jun for several years now, and when Doug first described him to me, I admit that I was initially a bit skeptical. After all, I thought "Gee, I’ve already seen every f*ing variation of sinawali under the sun, what can this Guro Jun possibly have?" Well, when I first saw him in action a few years ago, I realized that he did indeed have something which is light years ahead of 99% of FMAer’s here.. And furthermore, it had very little to do with techniques.

THE PROBLEM WITH FILIPINO MARTIAL ARTS IN THE UNITED STATES

The Filipino martial arts in general are taught all wrong on this side of the shore. A pragmatic, and effective method of weapons and empty-handed combat has been reduced to an odd collection of techniques and flow-drills. As a result of this, Western practitioners have become very proficient in a particular technique like redondo or abaniko, and also in pass-check-pass-tapping flow drills, while never developing the speed, power and body mechanics to necessary to become fighters as opposed to pretty flow-drillers. Like so many other martial artists who look great doing kata in the air, but lack the crucial understanding to make their techniques work against a opponent in real time.

Grand Tuhon Gaje never taught Pekiti Tirsia this way, but some PTK practitioners who have learned from 3d and 4th generation teachers have watered it down to that extent. If you ask them "What is Pekiti Tirsia?" they will say that it is 64 attacks, or knife tapping, or Break-in/Break-out. They don’t even realize that REAL Pekiti is body mechanics, timing, and mindset.

Back to Guro Jun. When I finally experienced the way he teaches Kali, many questions were answered. He does not base his method on anything but the most elementary of techniques; and his drills are far from being overly complex. Rather, Guro Jun teaches from the perspective of innate body mechanics. My students and I have found Kali De Leon to be more about physical culture than anything else. In other words, Guro Jun doesn’t teach you how to use a stick (or two), he teaches you how to use your body in the most efficient and explosive manner possible. And that’s what he looks for in evaluating other practitioners as well (I am speaking from experience!) Its common for traditional teachers of Chinese martial arts to take this approach; it is very rare to see Kali taught this way. Is it effective? Let me put it to you this way: witnessing a demo by any ‘intermediate’ level Kali De Leon practitioner will forever change the way you view Kali.

(be sure to check out http://www.kalideleon.com/)
Posted by guro jeff davidson at 2:32 PM 1 comment: 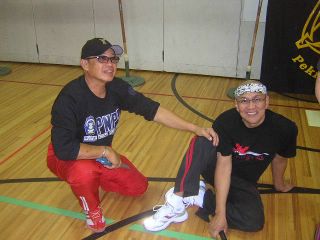 Just a few adjectives to describe the utterly sensational weekend in Rochester, New York that we had the honor of attending! What could be better than a full weekend of Kali training with Supreme Grand Tuhon Leo Gaje Jr. of Pekiti Tirsia - and Guro Jun De Leon of Kali De Leon?!?!?!

Our legs are dead from the endless footwork; our hands are torn with blisters and bruises; our sticks have been beaten to shreds; and our minds have shorted out from the overload of fighting knowledge imparted by these two living Legends of the Filipino martial arts. Tuhon Gaje broke and twisted us beyond recognition with Dumog and Pangamut, only to then puncture us with his Kol De Mama Daga double knife techniques. Guro Jun took us to the outer limits with the blazing speed and precision of his Largo Mano.

Capable support staff included Guro Doug Marcaida and Guro Burton De Souza of Toronto who thankfully translated the language of the Gods to words that us mere mortals could understand. It is a rare thing indeed to have the opportunity to share so much practice, wisdom and Brotherhood with such a dedicated group of practitioners who live and breathe their beloved Art.