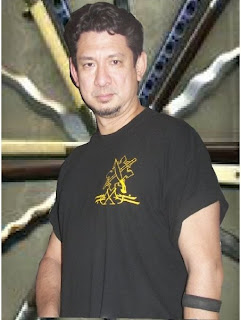 
Kuya Doug Marcaida is not as high-profile as a lot of other people in the FMA world, but he’s really a big deal around here. Our paths first crossed about 7 years ago in the Pekiti-Tirsia universe, when my students and I were in search of like-minded practitioners under Grand Tuhon Gaje to practice, refine, and grow in the material we were given by the Great Man. When we “found” Kuya Doug, something clicked.

Tuhon Gaje gave his blessing for Kuya Doug, myself, and Ka Jay Saludo to form The Brotherhood of the Blade - dedicated to mutual support and refinement of the Filipino Martial Arts and related disciplines.

There has been tremendous positive growth and development for us over the past few years, and much of it can be sourced directly back to Kuya Doug. Here are some examples:

It was through Kuya Doug’s introduction that I met the legendary FMA/Silat teacher Cigku Omar Hakim of Austin, Texas. Eventually I was invited by Cikgu Omar to attend a special training camp in Texas where I (along with 3 other people) became one of the first candidate instructors of the Malaysian martial art of Silat Kuntau Tekpi.

That experience opened the door to some important and highly valued friendships with notable Silat Melayu practitioners in Malaysia such as Mohd Nadzrin Wahab of Silat Cekak Hanafi (who became my mentor and younger brother at the same time), Ustaz Saiful Muhammad of Silat Telapak Nusantara, and Guru ‘Lan Tekpi’ of Silat Kuntau Tekpi Malaysia .

Another important relationship that grew from the Tekpi training camp is our friendship with two patently amazing martial artists: Ricky Rillera and Robert Slomkowski - see earlier posts. Thankfully, our friendship has endured over the years, and we were able to meet up again in Texas last year in San Antonio for an awesome weekend of sharing and training. BTW, Ricky Rillera and Kuya Doug happen to be old training partners.

It was through Kuya Doug that we met Ka Jay Saludo, leader of the Saskatchewan Pekiti-Tirsia group and co-founding member of The Brotherhood of the Blade. We became fast friends. During a training seminar in Rochester, New York that Kuya Doug was hosting, I had the opportunity to spend some quality time with Manong Leon Saludo (Jay’s father) who was kind enough to give me a spontaneous demonstration of the Batangas knife style he’s practiced since his teen years. In retrospect, I’m really glad he was using a rubber knife because 20 years of my martial arts career would have been brought to an abrupt bloody conclusion at his first counter.

I’ve discussed the differences between Pekiti-Tirsia knife training and Batangas knife training elsewhere on this blog. After a period of me requesting (begging) Manong Leon to teach me his method, he finally and graciously agreed, and we now pass this fearsome style to carefully selected members of our student body.

We were again in Rochester some years back for a seminar hosted by Kuya Doug featuring the incomparable Tuhon Leo T. Gaje. It was one of the largest seminar groups I had ever seen. As I recall, Tuhon Gaje’s flight from Korea was delayed, and Doug stepped right up to the plate to teach the first day on his own. Meanwhile in an adjacent area, my students and I were treated to a special training session led by Ama Guro Jun De Leon of Toronto. We couldn't know that this experience would shape our Kali quest for years to come.

That was our first exposure to the “KDL Methodology”, and even though we had a really hard time with it, everyone saw the value. We needed more. Over the next few years we trained with Ama Guro Jun every chance we got, and with his guidance, and hours upon hours of grueling practice – and we got better. The Maestro graciously allowed us to join the KDL family two years ago, and we continue to take advantage of every opportunity to study this world-class system under this world-class Master.

So you see, all the influences that make up our practice: Pekiti-Tirsia, Kali De Leon, Batangas Knife, and Silat Kuntau Tekpi – in one way or another have been undeniably inspired by the great Kuya Doug Marcaida. Like a true brother and friend, he’s always looking out for us; always pushing us to become better; always pushing us to grow and develop.

Thanks Kuya - it's been a fantastic journey so far. We’re all looking forward to even greater things to come!


Posted by guro jeff davidson at 10:19 AM No comments:

We just got back from the amazing Kali De Leon Summer Camp in Toronto. Give me some time to get my thoughts together and I'll be back with a review soon, G-d Willing.
Posted by guro jeff davidson at 11:17 AM No comments: