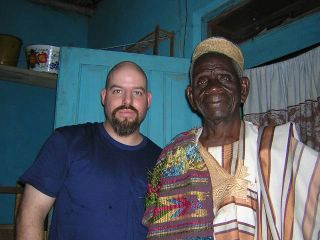 
Time and political climate permitting, I try to get back to West Africa - specifically southwest Nigeria - at least once a year to see my Teacher, Araba Adesanya Awoyade in the village of Ode Remo, Ogun State. I am pictured here with him in January of 2004.

Araba Adesanya is an Ijebu Yoruba. The Yoruba are a very diverse people. About 1/3 of the Yourba are Muslim; 1/3 are Christian; and 1/3 follow the indigenous spiritual tradition which is known by several names throughout what is now modern-day Nigeria, Ghana, Benin, and Togo.

The Ijebu in particular are considered to be the holders of the remaining vestiges of Yoruba martial arts. Ijebu land was originally established as a sort of penal colony, so it was founded and setteled by some pretty rough characters. In the war between the historical Kingdoms of Oyo and Ile Ife, the Ijebus supplied arms to both sides. The tradition of forging weapons is carried on to this day in Ode Remo. I have spent hours in the blacksmith's shop watching him forge knives (obe), swords (ada) and even shotguns - including the shot. The typical style of knife somewhat resembles the Indonesian badik only with a pronounced curve on the cutting edge.

Empty-handed martial arts in this part of Africa include native wrestling, called Gidigbo; and a boxing style called Jakadi. The Hausa to the north also practice martial arts called Dembe, Kukawa (a kicking system), Ishakafa, and there is even an "internal" system called Bori. I have also heard of a knife-fighting art that is practiced by Hausa butchers (fitting, I suppose.)

I am in the process of writing some rather detailed expositions on these systems, based on my field notes and converstaions with knowledgeable native African martial arts teachers in the United States. Stay tuned.

By the way, as recently as 2000, the martial arts practitioners in Ode Remo have begun to incorporate yet another Art into their fold, albeit a transplanted one...Pekiti Tirsia Kali!
Posted by guro jeff davidson at 10:46 PM 4 comments:

Thanks to Guro Apolo Ladra for sending us this group shot from the Legends of Kali seminar in Maryland. There might be a few people missing from this photo, but it was a great turnout!

Posted by guro jeff davidson at 2:53 PM No comments: