The second Silat Kuntau Tekpi class is tentatively scheduled for September 11th, 2005. We have many new members since the last class in July, and there were several people who were not able to attend that first session. Don't worry. You are welcome to join us in September, and will have the opportunity to make up the material you missed at a later date.

God Willing, I would like to finish up to the tenth buah next month. Also, I will be conducting a Silat Kuntau Tekpi seminar in Canada in October, covering Senamentua and the first 6 buah. All of my students who have membership in the Tekpi Organization are welcome to attend free of charge. See me in class for details.
Posted by guro jeff davidson at 7:14 AM 1 comment: 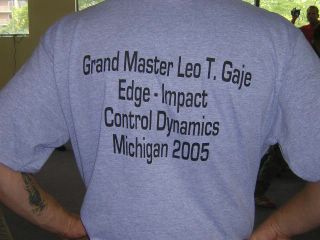 I speak for all of us when I say that the past 5 days was the most intense training we have experienced to date in Pekiti Tirsia. Once again , the upper level of Gold's Gym was filled to capacity as Grand Tuhon Gaje delivered a furious, exhausting, and absolutely exhilarating public seminar that tested the mettle of all present. The torturous physical conditioning coupled with the down-and-dirty combative tactics made a few of us feel like we were back in the Philippines.

Then, after the public seminar, it was off to the Law Enforcement seminar hosted by the City of Dearborn. Patrol officers, SWAT officers, Tactical Paramedics, and Police Defensive Tactics instructors from across Southeast Lower Michigan turned out in force (excuse the pun) to meet and train with the incomparable star of Surviving Edged Weapons. Also in attendence were members of the Royal Canadian Mounted Police.

Among all of the remarkable things I could (and will shortly) say about this event, one great surprise was that we had almost as many attendees from out of the country as we had from our local club.

I promise that as soon as I have all of the pictures (there were several officers in attendance who work undercover, and we need to make sure that they don't show up in the photos) I will put a full report on the www.maphilindo.com website. 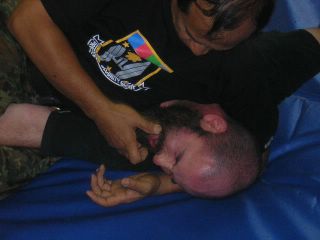 Here is the next batch of questions I keep getting via email:

What if any Pekiti Tirsia Organization(s) do you belong to?

I know there’s a few - and a few variations on curriculum. I’ll answer by saying that my students and I train directly with Grand Tuhon Gaje. We practice what he has taught us, the way he has taught us. We continue to refine our skills with other seniors in the Art from various parts of the United States who also are directly connected to Tuhon.

I do not have permission to say anything more than I already have regarding the Bantangas style. As for comparisons, how does a hand-forged ginunting compare to a sharpened kamagong stick? Both are weapons; both are extremely dangerous; however each is created in a different way. More concretely, Batangas is a “style” while Pekiti is a “system.” A Batangueno who has grown up in the culture learns knife fighting by living and applying it. Pekiti is a methodology by which someone who did not grow up with it can be made into a competent blade fighter.

What blade styles do you prefer in your art(s)?

For Pekiti, the ginunting is king. As far as a back-up knife, or daga, we use a custom made scaled down version of the ginunting. For Silat Kuntau Tekpi, we of course use the tekpi (aka cabang; trisula) and my personal favorite is the badik. The badik is a rather wicked knife...

Is there any grappling in your curriculum?

We have two grappling Arts: Dumog and Cambod. Dumog is an indigenous Filipino wrestling style popular in the mountainous region of Panay. People always ask two questions about dumog:

1) Is it practical against larger opponents?

Well, the farmers in Panay wrestle Carabao. Chances are you won’t face an opponent bigger than that...

2) Is it practical against multiple opponents?

I made the mistake of allowing one of my senior instructors, Sam Hammoud, to coax me into asking that question during one of Tuhon’s seminars last year. Tuhon had one of the students in a typical dumog control - meaning he had both of the guy’s legs painfully locked and was simultaneously applying a choke - when I raised the issue of multiple attackers. Tuhon invited me to attack, and very nearly broke my right leg in two - but for his excellent control. If he had followed through on that kick, I would have sustained a broken leg for sure, and probably a broken neck from the whiplash. In the video, I am knocked clear out of camera range. And he never released the first student from the choke or leg locks in the process.

Cambod is slightly different than dumog, although the result ( ie. a crippled opponent) is essentially the same. If you look at a standard dumog combination from entry-to-lock-to-takedown-to-control, and then repeat the sequence moving in almost exactly the opposite direction on the opponents limbs, that’s Cambod. To my knowledge we are the only group in the United States that has learned Cambod from Tuhon Gaje.
Posted by guro jeff davidson at 11:09 PM 6 comments: