Remember the 'Bible Code' that was all the rage before the 'DaVinci Code' made the scene? A friend of mine has a Bible Code software program where you type in a word or phrase, and it gives the chapter in scripture (parasha) from where your term or phrase is said to "emanate". This has to do with Kabbalistic concepts such as Gematria and Tzeruf which are beyond the scope of this blog to explain. Well, we typed in the phrase PEKITI TIRSIA and what we got back is the story of Pinhas ben Yair, summarized below. Maybe there's something to this after all...

The story of Pinhas actually began at the end of the previous Parashah. While the Israelites were encamped at Shittim, they were induced to having sexual relations with the Moabite women, who also invited them to the sacrifices for their god. The Lord was incensed with Israel and commanded Moses to have all the ringleaders publicly impaled. Just then one of the Israelites came and brought a Midianite woman over to his friends. When Phinehas, a priest, saw this he took a spear in his hand and stabbed both of them, the Israelite and the woman. Then the plague against the Israelites was checked. This episode of valiant behavior seems to end the rift between God and the Israelites.
Posted by guro jeff davidson at 5:56 PM 4 comments: 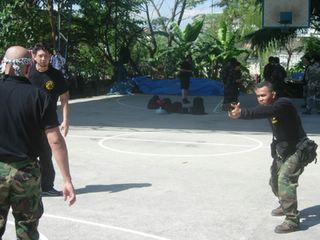 
As a TRUE combat system, Pekiti Tirsia has an extensive firearms/tactical shooting/pistolcraft curriculum in place since the 1970's - once again putting GT Gaje far ahead of the curve in terms of realistic martial combatives. It was after all Tuhon Gaje that opened the eyes of many in the Law Enforcement community to the dangers of edged weapons in the legendary Surviving Edged Weapons film. Well, he’s as crafty with a pistol as he is with a ginunting.

As a matter of record, the pre-Marcos Philippines was as much a gun culture as a knife culture. It is therefore not surprising that the Filipinos developed sophisticated systems of personal combat focusing on the pistol as a necessary and pragmatic complement to their bladed arts. And in case you hadn’t noticed, guns happen to come into play during many crimes committed here in our land.

Earlier this year, we had the privilege of learning Pekiti Tirsia’s unique GUN SEGUIDAS directly from Tuhon Gaje during a SWAT seminar in Rochester, New York. In February, we learned the Batangas style of gun fighting as was common on the streets of Lipa City in the turbulent pre-Marcos days. Judging from the tales that our Tito Jun related, the streets of Batangas back then made the ‘67 riots in Detroit look like a tipsy gay-pride parade in Ann Arbor.

We take the concept of self-defense very seriously. Although the discipline of Kali is most certainly a bladed Art, the fact remains that blades can be legally prohibitive to carry on one’s person. Pistols are as tactically viable as blades in most close quarter combative situations, and in many cases are more legally viable than knives. Luckily for us, Michigan is a “shall issue” State with regards to concealed weapons permits, meaning that unless you’re a convicted felon - or nuts - you can carry a pistol almost anywhere. I encourage you all to take full advantage of this while you can. Instead of getting that silly plasma screen TV, get a good handgun and learn how to apply your Kali training to this weapon. It will serve you in good stead.

Over the past few years, many of the Detroit Maphilindo Pitbulls have in fact become avid ‘gunners’. So it is with great pleasure that we will be adding a TACTICAL PISTOLCRAFT module to our gameplan beginning in the fall, under the direction of Cpl. Ungyo - who is a seasoned Patrol Officer, SWAT Operator, and Certified Assistant Instructor in our much-in-demand Edged/Impact Weapons Defensive Tactics for Law Enforcement program.

The first class(es) will be presented in seminar format. The dates will be announced in class. You will need: eye protection, a training gun (either a red gun or an airsoft pistol), holster, and street clothes. Email me for further details.
Posted by guro jeff davidson at 6:53 PM 1 comment: 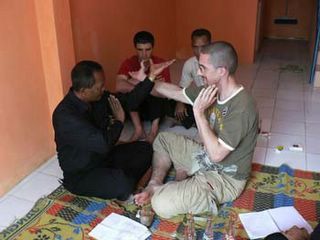 
Now that our Brother Gorka Echarri has returned from yet another successful journey to West Java - including Banten and Tari Kolot - we are grateful to him for taking the time and effort to translate some history of the Pendekar Banten organization and its esteemed founder Pendekar Hassan. - JD

The PPPSBBI (Persatuan Pendekar Persilatan Seni Budaya Banten Indonesia) is a regional organization created in 1971 by Pendekar H. Tubagus Chasan Sochid. This organization has been created to unify all the old schools from the Banten area including Cimande Macan Guling, Jalak Rawi, Macan Paku banten, Satri Muda Indonesia, Terumbu, Bandrong, Gabak Lumayung.
Before the PPPSBBI, in Banten, there were Jago (or jawara) that were some kind of strong fighters, with also often strong ilmu and they were working for their district, for a group of villages. They were assuming the security of their group, sometimes by fights with
other jago or sometime by playing the bully with citizens from an other district. Pendekar H. Tubagus
Chasan Sochid succeeded in joining most of this jagos under one single organisation, under his authority for the benefit of everyone. That's why some people are calling Pendekar H. Tubagus Chasan Sochid, Jawara of the jawaras. Their action became the promotion of their specific style of Pencak Silat, also assuming the security in some gatherings, some city parties, for the youngest, working as security in supermarkets, assuming the security of the political party "Golkar"... The PPPSBBI, is officially recognized by the Indonesian governement.
There are actually 90 different styles under the supervision of the PPPSBBI,
500 000 silat players under this organization in the Banten area. Some students came from Malaysia and from Australia to learn Pencak Silat under the PPPSBBI. Gorka Echarri is officially the PPPSBBI "ambassador" for international promotion of the PPPSBBI and has the official right to support any schools that want to learn traditional Pencak Silat styles from Banten (Cimande Macan Guling and Terumbu Gajah Putih). This organization has a very strong influence in Banten and you can feel its influence in the everyday living in the streets of Serang and surrounding areas.

In addition to academic studies, Pendekar H. Tubagus Chasan Sochid also studied different spiritual schools from Banten (for healing and Pencak Silat) and gained a high level in
them. He has been recognized as a true Jawara (strong man from inside and outside).

As a regional organisation, the PPPSBBI is renowed and has a strong reputation. The organization is promoting all the traditionnal schools and help their improvements. For competitions, each school within the PPPSBBI is free to join the competition or not.
Some schools play in this IPSI competitions by joining in Sumatra, other parts of Java.
The schools are free to join or not and there is no judgment from the ones who joined to the ones who
doesn't want t join. They live all together in a good
intelligence.
Posted by guro jeff davidson at 3:56 PM 2 comments: