A Brief Talk with a Malaysian Silat Teacher 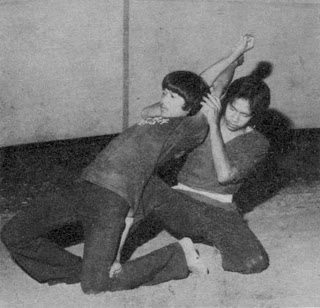 Happy New Year everyone! I had the occasion to speak recently with a well known (yet very low profile) practitioner/teacher of Silat Melayu in Malaysia. Here are a few Q and A's from our discussion:

I know that you have studied several systems of Silat Melayu under different teachers. How do you feel about incorporating elements of different systems into your practice?

Everything comes from outside, Silat masters here over the years literally scooped from their friends to complete their styles. I know of one particular master who does that all the time over here to such an extent, other masters claim he steals!

So how does this play into your own development as a practitioner?

My own development is my own natural cause. The particular system has its own founder who has his own set of beliefs and convictions. The only way I can truly become like the founder is not to follow his footsteps one hundred percent, but to find my own convictions. In a way my own path has allowed me to understand theirs.

Is that a deviation from the “traditional” approach?

I consider myself a traditional martial artist…a traditional pesilat. Before the 1950s, before Gayong and Cekak and Lincah and so on, there was only silat - and silat was whatever you made it to be. If you saw an old Chinese fellow doing damned good kuntau, you made sure you learned some. If you saw a farmer swinging his hoe really fierce like, you made sure you learned it. You made it your own.

Traditional silat training consisted of a 100-day crash course. After that 100 days, you were expected to become your own master, teaching yourself. There were no grades or certificates. How good you were depended on how good you were. I'm comfortable being who I am because now, nobody can touch me. My previous perguruan still acknowledge me as their member, and they can't say anything about my loyalty.

How do you yourself evaluate a particular technique or pecahan when you observe it for the first time?

I sit at the middle of everything and interpret movements not based on uniform or 'system', but of the objective and function. It's difficult to explain how I see it, but the petua firmly embedded in me- most of which I don't understand how to explain yet - but everywhere I look at people, at cats, at machinery, I see lines of energy and possible movement. Looking at a joint, a have a good idea what amount of force and leverage will take to lock it. With more experience, these petua will gain more definition.

Does this ever create friction with your Teachers?

I do respect my masters. It's the idiot students I’m always at odds with! All my masters support my journey. When I talk with them frankly and describe my experiences, the Masters, if not the students, will be supportive. Because of what I call the “Grandmaster-Grandfather syndrome”, they can't choose between grandchildren nor students so, the students fracture when the masters die. Silat Cekak Hanafi and Seni Gayong maintain that their students are not allowed to study other arts, but the masters on top always deny this exclusiveness.

What is the value of Community in Martial Arts training?

I will say this again: Silat is only good because of our community. We're not allowed to waste time and money. If you study martial arts just because it's a hobby, where's the increase in quality of life for yourself, your family and your society? If you're the only beneficiary, then you've wasted your time - nothing to give back, nothing to pass on.

For some years now there has been an effort to make Silat an Olympic sport. Some groups have developed a purely competitive branch of Silat. How do you feel about the concept of “Sport Silat” being promoted at an organizational level?

Sport silat is going nowhere - not because the techniques are not 'authentic' - but because there is no pure motive behind it. In Malaysia, Malay culture has been classified and documented and theorised and crystallized. Everybody knows what Malay culture IS and what it is NOT…and sports silat is NOT it. Which is why we're happy to live our lives in the gelanggang LEARNING silat. In certain other SE Asian countries, there is a problem with classification since there are so many clans and cultures.

The one export that will make the whole world fall in love with silat, is something the world understands, and the world at large doesn't understand a ‘dancing-fight’ style. But they do understand sports and that is the ticket to the big leagues. The next logical step is to impose SE Asian culture and values upon the MA community the same way Karate, TKD and Kung Fu did. Now PESAKA is trying to do just that.

How do the more traditional Masters feel about this?

The Masters aren't supporting sport. They say silat is for the community, not for the individual silat world champion who will spend milllions training. Don't look at Cekak, Gayong. Lincah or Gayung Fatani - they aren't recognized as traditional styles - the values are different, but THEY make up PESAKA.

On the other hand, it’s a moot point to try and convince an Indonesan otherwise of his opinion, because Indonesia created sport silat. Up until the 1970s, we still had legal no holds barred tourneys, which became illegal in the 1980s. Deaths were not rampant - but were expected. PESAKA didn’t like that.