The resident 'Pandai' (Bladesmith) of the Detroit Maphilindos - Ungyo - who has a mind for history as sharp as one of the blades he forges -was kind enough to send me the following tidbit of Military history... JD


Some background on Ward, taken from The Devil Soldier: The Story of Frederick Townsend Ward, The Most Honored and Controversial American in Chinese History , by Caleb Carr:

A soldier of fortune who became a military genius of astounding virtuosity, American adventurer Frederick Townsend Ward fought with William Walker in Mexico and in the French Army in the Crimean War. But it was in China- a country that always exercised a powerful hold over him- that Ward would conduct one of the most extraordinary military campaigns in history.

In 1859, the local Chinese authorities of Shanghai were faced with the approaching rebel army of the Taipings; cornered, they looked to the local western population for help in defending the city. At this crucial stage of the Taiping rebellion- the most bloody and destructive civil war the world has ever suffered- Frederick Townsend Ward emerged as the man able and willing to take history into his own hands.

Ward built the Ever Victorious Army- otherwise known as The Devil Soldiers - in response to the mounting rebel threat/. While leading this highly successful force of Western trained Chinese soldiers, Ward was wounded many times, imprisoned by the British on a warship (from which he made a dramatic escape) and naturalized as a Chinese citizen. He eventually married the daughter of a Chinese mandarin, won a string of critical victories against the Taipings, and was awarded a generalship and a mandarinate of his own.

By June of 1860, Ward had a polyglot force of 100 Westerners, trained in the best small arms (including Colt revolvers) and rifles available for purchase in Shanghai. Protesting that his forces were not fully trained, Ward was forced by his Shanghai backers to take his men into action alongside Imperial forces probing Taiping advances, retaking two captured towns. They were then forced by circumstances (and the urging of their Shanghai backers) to assault the Taiping occupied and fortified city of Sung-Chiang, without artillery a near impossible task. The attack failed, sending the thoroughly defeated force back to Shanghai.

The Foreign Arms Corps had no siege equipment, a deficiency Ward hoped to overcome by attacking at night and, with luck, achieving surprise. But the men of the corps- perhaps overly impressed by the part they had played in he two earlier victories- brought large amounts of alcohol with them on the Sung-Chiang raid. By the time they were making their way across the flat, grassy terrain outside the city, they were making so much noise that the Taiping sentries were alerted to their approach. The corps suffered heavy casualties and was thrown into flight. ̃The miserable survivors, Dr. Macgowan wrote, "returned as stragglers to Shanghai, utterly disgusted. They were paid off and disbanded." (Carr, p.90)


In the face of this disheartening spectacle, Ward dismissed almost all the men, retaining only those who had demonstrated bravery and ability and whose arrogance might be transformed, with time, into something like authority. These few would become officers. But they would need men to command, and it was now necessary to rethink old notions about who in Shanghai would make the best soldiers of fortune. Ward took to the waterfront once again to grapple with this riddle and soon made an acquaintance who facilitated a solution.

Vincente Macanaya was twenty-three in 1860 and one of Shanghais large population of Manilamen - Filipinos who were handy on board ships and more than a little troublesome on land. Renowned as ferocious fighters, especially at close quarters, the Manilamen were in a class with the famous Lascars of Malaysia and the pirates of the Bay of Bengal, groups that were also known to frequent the foreign settlements in Shanghai.

Macanaya himself- who would, after his initial acquaintance with Ward, be known throughout Shanghai simply as Vincente- had been born in Manila and was a seasoned young man of singular courage. As Charles Schmidt, who swerved with and knew him well, wrote while Vincente was still alive:

"If real bravery consists in an undauntedness of spirit, a cool presence of mind, and active physical exertion, then all these qualities are combined in Vincente to a degree that leaves no doubt on the minds of the many friends who know him, and have seen him so fearless in the midst of danger. He has all the appearance of a soldier. There is nothing rough about that appearance. [He is] gentlemanly in his ways to all, kind hearted to his friends, sober in his habits, quick in perception, frank, liberal to a fault, and with an eye always to duty, serving faithfully where he serves, beloved and respected by his comrades in arms."
Posted by guro jeff davidson at 8:30 PM 2 comments:

The following information stems from a correspondence between a student of mine and a highly knowledgeable and well-spoken Silat teacher in Malaysia known as Saiful Azraq. - JD

Silat Cekak Hanafi & Silat Kuntau Tekpi
Based on my encounter and studies, all of the arts have the potential
to be a softer, more circular art depending on who teachers it. For
example, I studied Silat Cekak Hanafi when I was 18 from instructors.
The way the syllabus is performed by the instructors is undoubtedly
hard, fast and brutal. However, watching my Principal, Tuan Guru Md.
Radzi Haji Hanafi execute the very same moves, is like watching a more
streamlined version of the buah. Physically the look is the same, but
has less of an edge to it.

Conversely, I studied Silat Kuntau Tekpi from cikgu Norazlan Wahid,
incidentally also cikgu Omar's immediate teacher. Cikgu Norazlan
already has a softer edge to him and those who study under him tend to
flow easier through the buah. An example, when I visited cikgu
Amirul's gelanggang in AU3 Kuala Lumpur, he was still in yellow belt
and training under cikgu Azhar. When we performed the same buah on our
partners, I completed mine before he managed to. Both of us were
surprised and cikgu Norazlan confirmed this difference due to cikgu
Amirul studying the syllabus 'by the book' while I studied it in terms
of flow. This is not a difference in quality, simply method.

Silat Kalimah, on other hand as taught by guru Eusoff Ali (aka Pak
Jauhari), as a 63 year old man is far softer and economical than Silat
Kalimah as taught by anyone else. Previously, SK was as brutal if not
more than SCH and had a harder edge. Twenty years of thought and
development (and 3 months of discussion with cikgu Omar and us) and
Pak Jo has redeveloped the Kalimah syllabus into a more economical
version, correcting and compensating for problems inherent in the
present SCH syllabus. You won't find this development in other Kalimah
syllabi.

Within the Persatuan Seni Silat Kalimah Yahya Said organization (which
is not national, currently only comprises three states), there was an
initiative to create a federation between them and Silat Kalimah Amin.
Pak Guru Zohdi was appointed Guru Tinggi (I think this is the term
they used. Have to check. Sorry) while two other eminent masters, Pak
Muslim and Pak Jo were appointed Guru Utama under him.

When cikgu Omar expressed his interest to study Silat Kalimah, Pak
Zohdi recommended that Pak Jo teach him as Pak Jo had a better command
of English than he and the rest as you said, is history. Therefore,
the current syllabus being taught in the United States is Pak Jo's
version.

In comparison Silat Cekak Hanafi has 21 buah split into two levels of
advancement, Asas (Basic) and Jatuh (Takedowns) while Silat Kuntau
Tekpi has 42 buah and Silat Kalimah, 27 buah taught in the original
format of straight to takedown forms.

Silat Cekak Hanafi under Ustaz Hanafi espouses a very practical
spirituality, preferring to inculcate their students with simpler
methods of recognizing Tauhid. They are taught to never disobey their
mother, father and teacher, never to lie and always keep promises.
They place performance, hard work and diligence first. There is only
one common du'a practiced by all SCH pesilat and is provided at the
end of the syllabus.

For Silat Kuntau Tekpi, you will have to ask cikgu Amirul. He has
better resources than me on this. Seriously.

Silat Kalimah as I understand it is not any more spiritual than SCH
but the impression is there because of cikgu Omar's studying from Pak
Jo. There is a difference between studying from a master and an
instructor. Students also receive a similar du'a at the end of the
syllabus. I have not gone far enough within Silat Kalimah to elaborate
further.
Posted by guro jeff davidson at 1:27 PM 4 comments: 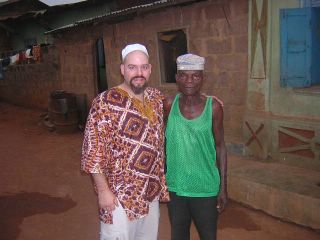 Alapankoko!
One Sage is more powerful than another
One Sage can swallow another completely
The parrot flies to the top of the Iroko tree
and its voice is like an iron gong
All of them spoke for "The-Spirit-of-Destiny-Brought-Good-Things"
The first son of the Chief, who protects himself with his great Mind
He said: "Please inform Alara that I have met with good fortune"
He said: "Please inform Ajero that I have met with good fortune"
He said: "Please inform Owurangun, the owner of the Royal Chair that I have met with good forutne"
The lost good fortune has returned!
If good fortune enters the house, let us be calm in handling it
If we are quick-tempered or impatient, good fortune will retreat to the jungle
The Joyful! The Multitudes! I shall die in the midst of a crowd of children
I heard the dropping of star apples...children, please come 'round and gather apples for me
The Sneaking Cat Society...The Society of the Powerful
The Owner of Igodo Spring water, that people wake up early to fetch 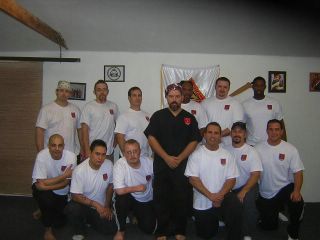 Due to the overwhelming interest in this Malaysian system, we have already formed a separate "Beginning" and "Advanced" class for Silat Kuntau Tekpi. Pictured above is the Advanced class of 2005.
Posted by guro jeff davidson at 8:50 PM 11 comments: