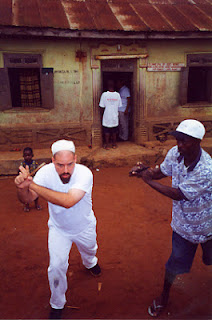 I recently had the distinct pleasure of teaching a very well-received seminar on a little-known West African martial art that I practice.  Many of the students in attendance asked me so many questions afterwards, and a lot of them have followed up with emails after the fact.  Because of time constraints, I unfortunately did not get a chance to chat with everyone as much as I would have liked - and I apologize.  So in the next few posts (I'll keep it as short and to the point as I can!) I'd like to answer some of those questions that were asked either in person or via email.  I hope you find some value in it! - JD

I had no idea there was such a thing as African martial arts?

Well…live and learn! Africa is a large and diverse continent with a deep history and rich cultural legacy that spans many centuries.  Any culture that has had to survive in a dangerous environment developed martial arts. Particularly in West Africa, do some research on the Oyo Empire just for a start and then consider whether or not those soldiers had some type of martial arts training.

On a more elementary level, any time you just get a group of “guys” together – there is going to be some type of combat!

What you will not find if you are researching indigenous African martial arts traditions are formal schools, organized “systems”, uniforms, direct lineages or even written records – all the things that people associate with the martial arts of Asia.  Just like Indonesia and the Philippines, historically we are referring to a local, and largely oral tradition.  Western-style scholarship has not examined the indigenous and/or diasporic expressions of African martial arts the way the martial arts of Southeast Asia have been studied in this century.

Which African martial arts have you studied, Guro Davidson?

I have specifically studied, researched, and trained in several styles from the Kongo, but my specialty is Yoruba martial arts.

How did you get started?

I followed my Head via my ears to Cuba and then Africa.  My segue was actually music. Right about the time I began studying Kali and Silat in the late 1980’s, my direction as a musician was evolving, and I was drawn into the profoundly groovy world of Afro-Latin percussion.  There were a lot of Cuban and Puerto Rican musicians in Detroit at the time.  One of my fellow Kali students was an accomplished conga-player and protégé of the legendary Baba Juma Santos (May He Rest in Peace) and that’s when and where my informal training really began.

Salsa and Merengue were really popular at the local dance clubs in those days.  If you were a percussionist and you wanted to pay your rent and eat from time to time, that’s what you played as your bread and butter. In private however, the guys that I hung around and jammed with were also very frequently called to accompany various local ceremonies relating to the Afro-Cuban religious traditions.  The same way you have an organist at a Christian church, you typically have a battery of drums for these particular ceremonies if the host can afford it.

In an odd way, it was through this “liturgical” style of percussion that I became aware of how closely linked this music was to the martial arts.

Can you explain that?

Two of the major African influences in Cuban percussion are Kongo (Central Africa) and Yoruba (West Africa).  This is true of their popular music, but it really goes back to the Spiritual side.  And from that, you have kind of a yin-and-yang paradigm.  The Yoruba drum rhythms, chants, and songs are considered to be ‘cooling’, balancing, and social.  In contrast, the Kongo-influenced patterns of dance, drumming, and chanting are very ‘hot’ and extremely aggressive.  There are unmistakably clear and direct references to warfare in the physical and metaphysical arenas.  It’s very militant! It is not really surprising since a lot of the African slaves in Cuba that escaped into the jungles and formed bands of armed resistance were Kongolese.

Anyway, there were many chants/songs that refer to taking the head of an opponent or oppressor, and the accompanying dance movements were themselves nothing different than martial arts.  It reminds me of the lore of Kali where fighting techniques were supposedly choreographed into the traditional dances and dramas of the Filipinos during colonialism.

The folks that I played with were very highly accomplished in this form.

Were they also martial artists?

A few of them actually did some formal training in Karate or whatever.  Most of them had been in the Army in Cuba before they came over here so they had that experience.  But remember – we’re talking about musicians.  These were not 9-5 people. These were folks that plied their craft after the sun went down.  More often than not, they were in some way involved with the often dangerous sub-culture of what I call the ‘underside’ of the community.  Being that this was Detroit in the late 80’s/early 90’s you can probably use your imagination to figure out what I mean.

As good as the music was, I also regularly saw some rather spectacular displays of violence from that crowd.  In fact, it wasn’t uncommon to hear that someone you jammed with last weekend “wasn’t around anymore” for one reason or another.  So no, they were not martial artists in the sense that they formally trained in a dojo or anything like that – but they were no strangers to violence and had a lot more streetfighting experience than 90% of the black-belts out there.

Again, just relating it to Philippines, if you listen to my teacher 'Tito' Jun Saludo’s stories of the Barako Batangueno culture, it’s very similar.  It’s interesting to me that in many parts of the world shamans, musicians, gangsters, and martial artists tend to occupy the same strata of society.

To be continued...
Posted by guro jeff davidson at 4:24 PM No comments:

It’s really great to be back as a returning student.  14 years is way too long to be gone, but we have to go where Life takes us and Life sometimes brings us back to where we need to be.  Amongst all the new faces in class I see a few familiar ones and it’s absolutely amazing to see how much everyone has improved. Wish I could say the same for myself, but on the other hand I’m very excited to have some new goals to shoot for in my martial arts development.

Almost everything about the training is so different, besides the last time I saw you your beard was red and now it’s grey.  Everything from the material, to the way you teach, to the students themselves is on a much higher level than I remember.  The group is so “tight” and so much more supportive than I remember.  What would you say is main factor (if there is one) that pushed everything forward so much since I last had the pleasure of training with you in the 90’s?

Welcome back!  The door always remains open for the right people.  It’s difficult to condense or summarize the past decade other than to say it has been a monumental journey of Introspection, Discovery, and Refinement – you know…those certain “incidentals” that are supposed to be the Foundation of your lifetime development.  One thing that never changes is our desire to grow…to get better…to leave the comfort zone and be challenged.  And to seek out those who can take you there.

If you open this link http://www.maphilindo.com/web/gallery/our-teachers.html you will see the Great Ones that have guided us this far.  Each picture is truly worth more than a thousand words to tell the story of how and why we train the way that we do today.  The lessons, the teachings, the responsibility, and the standards are theirs.  The shortcomings are our own.

It’s not an easy Path, and a lot of people can’t understand it.  But then, appealing to the masses has never been a priority with us. So, as I believe I told you 14 years ago: all you have to do is set your sights on your Goal, and then decide how hard you are willing to work to attain It.  We’ll take care of the rest, G-d Willing. 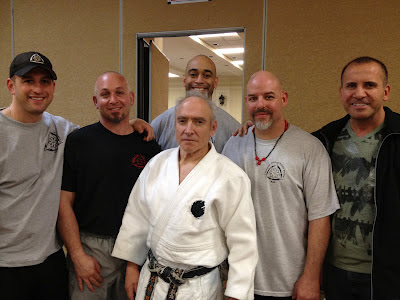 It was a great pleasure to cross paths with a great Master and Teacher whom I have personally admired for many years – Sensei Roy Goldberg.

When I first saw Goldberg Sensei in action – it had to have been over 20 years ago – I was nothing less than inspired. I remember thinking to myself “Man, I hope one day I’m as good at what I do as he is at what he does.” So it was truly an honor, not to mention a bit intimidating, to notice him intently observing one of my classes at the SMAF. He even paid me what I consider to be a high compliment. He said to me:

I’ll treasure that as I would a compliment coming from Ama Guro Jun DeLeon.

I’m also very happy that my students took advantage of the opportunity to be thrown, locked, and twisted in horrible ways by such a Teacher. Believe me, it was great to watch.