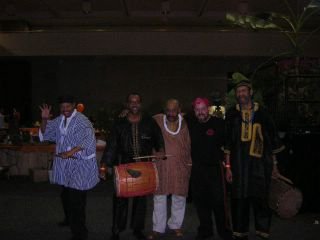 Guro Davidson with Hamisi and the Rah African Drumming Ensemble

Our most recent demo took place at the Southfield Civic Center pavillion, and was sponsored by Aloha Tropics. This festival featured a multi-cultural lineup of Indian, Hawaiian , Filipino, and Spanish folkdancing, as well as African Drumming and Filipino martial arts.

The Detroit Maphilindos are grateful to our new friends, The Rah African Drumming Ensemble from Mt. Clemens for providing outstanding live percussion during our set. Now, most drummers in Detroit are so heavily influenced by Cuban modes that even when they try to play traditional African rythmns, it still sound like Salsa. This group was different, however. Their playing was so inspirational and "in the pocket" I literally could not stop moving! Even after our part of the demo had concluded, Hamisi and his group played on, so that I had no choice but to take up a sword and dagger and go where the Spirit led me.

Hamisi is a practitioner of Filipino martial arts himself, and we discovered that we have several friends in common in both the martial arts and percussion scene in Detroit. Small world...eh?

Gentlemen, I say to you "A dupe pupo!" I hope we have the pleasure of performing together again soon.