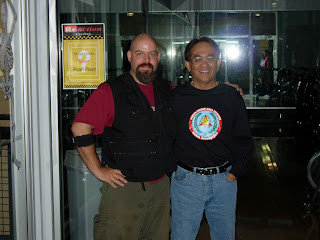 Read below to see why I am wearing that armband


I should emphasize that he didn’t wait for me to feed anything. He just started closing, and I was immediately on the defensive.

In spite of a lingering feeling of doubt, I responded with a fast, direct thrust to his center, which he neither parried nor angled away from, but somehow “slipped” past. Then true to his word, he unleashed two lightning slashes and a finishing upward thrust that ended with the tip of the blade perpendicular under my chin.

It was so fast that I hadn’t even had time to withdraw my failed thrust, let alone answer his combination. He stepped back. “That’s what we used to call ‘Tres Cantos’.

With my arm still outstretched, I opened my hand and allowed the wooden knife to drop straight to the floor. I’ll never forget that moment. I wasn’t being dramatic. I was making the point to him and to myself that I had just been ‘owned’ – as they say. He seemed to receive the gesture. When I reached down to pick up the knife at my feet I observed a small circle of blood droplets on the floor. The inside of my arm was bleeding from a cut. There was also a spot of blood on Tito’s knife.

Very few people would understand how I reacted at that point.

Correction: you were 'pwned!' LOL

Is it true that Mr. Saludo gave full certification only to two individuals to teach Batangas knife? You and Doug Marcaida? Nobody else?

Be careful when you can't see Tito's hands.

@Anonymous 4:46pm
You're getting way ahead of the story!

If one was to share with me a rare time honored family traditional style such as this,....I think I would consider an injury such as yours, a cut of honor.

...and next time your invited into a private room with him, I'd be quite sure to have a keen eye about me and most seriously be meditating about self preservation. [wink]

@FTP - It's my favorite scar to this day. My own daughter STILL doesn't believe that the "kind Filipino gentleman from Canada" who gave her her first set of earrings years ago was the same one that gave Daddy that scar!