SKT and SCH: A Comparison 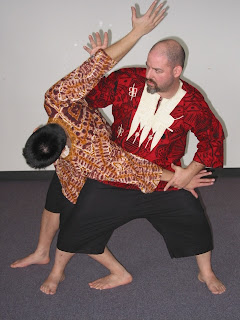 Ka Jay Saludo in the grips of a Silat Kuntau Tekpi Buah
For all those of you wondering about the similarities between Silat Kuntau Tekpi and Silat Cekak Hanafi, here's an article by my friend, the great Mohd Nadzrin Wahab taken from his silatmelayu.blog.com

Silat Cekak (as founded by Ustaz Hanafi) and Silat Kuntau Tekpi are related in many ways, the least of which is their Kedah connection.

First off, both arts claim lineage to the palace arts of Kedah, and cite certain General-governors, or Panglima as their ancestors. Silat Cekak claims Panglima Ismail as the earliest of their lineage while in Silat Kuntau Tekpi, that honour is given to Panglima Taib. It is unknown what their status are in the official Kedah records.

Silat Cekak and Silat Kuntau Tekpi share similar philosophies, parrying idioms and methods of striking and locking. Both await attacks in a high stance, both subscribe to close body parrying and locking.

Both arts are loosely based on the idiom of Salat, the Muslim prayer form. In Cekak, there are four basic parrying methods:

Kaedah A, based on Du'a (supplication)
Kaedah B from Qiam (standing with arms folded)
Kaedah C from Ruku' (bowing with hands on knees), and
Kaedah D from Takbir (hands in surrender position).

They even share many buah, similar in look and form. For example Ali Patah Atas (Cekak) and Kembang Layar (Tekpi), Kuntau Kanan Gantung (Cekak) and Ubah Haluan (Tekpi), Kilas Belakang (Cekak) and Kilas Maut (Tekpi) and in fact, even share one buah name - Pasung Kemanga, which in reality are mirror versions of each other: One locks the left arm while the other locks the right arm. The exact same buah, but reversed.

Other than this, Cekak and Tekpi differ quite a bit. Cekak has no bunga component and subscribes to modern warm-up and stretching methods, while Tekpi still has its Pelebat, an undulating dance form that serves as a traditional exercise.

The Cekak syllabus is broken down into four phases: Basics, Takedowns, Recounters and Graduation. In the first four phases there 21 buah are gradually built upon.

The Tekpi syllabus is broken down into four belts: White, Yellow, Red, Brown and Black. White and Yellow belts each have 21 different buah (which makes 42), in Red are the 5 Pukulan buah and the Tekpi exercises and usage of Tekpi in the previous 42 buah, while the Brown and Black belts are considered advanced levels for senior instructors.

Cekak has the Lading as its official weapon while Tekpi has its namesake as its normalised weapon.This sort of comparison would make a very interesting thesis or research paper, especially if we include the other claimed descendants of Silat Kedah such as Silat Kalimah, Silat Palintau, Silat Gelombang Acheh, etc, etc.

Unfortunately, undertaking such a project would take years and needs to cut across national, political and emotional boundaries. I would be open to anyone who would like to share their resources to pilot such a project.

Guro, are you having a buah review class again soon?