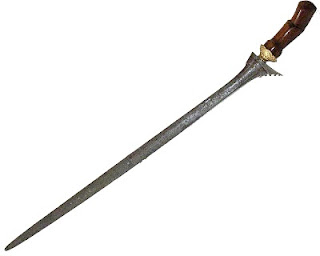 Remember that after seizing the opponent’s left arm (after the pijak) you step up and lock his ankle with your left foot at the same time you push the straightened arms forward. After the takedown, you might lose the ankle lock as you remove the left foot, so be sure to sink your shin deep into his thigh in order to maintain control.

Remember the stomp to the center of the back as you move into position for the leg lock. Move your knee not your foot to accommodate the lock.

These two buah achieve similar results – in the “gentle” version, the opponent is locked on the ground while your arms are completely free to draw your weapon. In the “combat” version, it’s basically the same effect only the opponent will most likely never walk again without some kind of assistance.

An example of pecahan with these buah: you begin with the first one, then suddenly you have to pivot 180 degrees to deal with another opponent, while still maintaining control of the one you’ve just taken down. Go into the crouch and draw your weapon!

@ Jeff: I think I would find your classes rather challenging yet I'm quite certain I've got the
'Go into a crouch and draw your weapon' move down!...and regarding your past "Save The Date" post, I pray your brothers have safe travel and a successful seminar in Florida.

Thanks for the kind wishes. Now Crouch and draw your weapon!