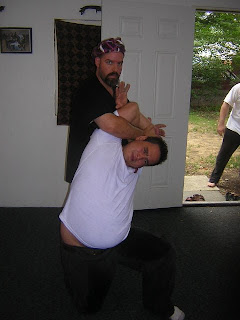 At a recent class, we were working on Pekiti-Tirsia's "3d Hand" principle against multiple knife thrusts. The usual plan is to render the opponent blind, or otherwise knock him senseless and then range-out in an explosive manner to "welcome" the next opponent. For this particular class however, I decided to show how kuncian (locking) from Silat Kuntau Tekpi could be applied against a knife attack. After waylaying the knife, instead of ranging-out you immobilize, then lock him down from his core. Some of the newer students were seeing (and feeling) Silat Kuntau Tekpi for the first time.

The next day, one of the students sent me the following note:

After bugging you for awhile to demonstrate Silat Kuntau Tepki to me, now that I have seen it, I am almost sorry I asked. I can only describe this martial art in one word, cruel.

I have been exposed to joint locks, but it appeared that almost every technique you demonstrated worked on destroying the entire body rather than focusing on a single point.

The interesting thing about this was the simplicity of getting the opponent - actually victim - into the positions you want them in. Unlike some of the grappling arts I have seen, most of these moves happened without any setup, you just went directly into them.

After seeing this I must say that I would rather be beaten with a stick or cut up with a knife than face a Tepki practitioner and have my body broken in this ferociously painful manner.

With all of this being stated, I will say that everything I was shown was brutally effective. If a person wanted to end a fight immediately in such a way as to make even the onlookers wince in pain, then this is the art to use.

Just my thoughts on what I witnessed.

Ah, Mike... welcome to the club. You have now joined the many thousands of Pak Pacak (sparring photo victim stand-in to make your guru look cool while you look like a fool), thinking you're providing a service until you see the actual pictures and realise that millions of people online now know what the skin on your hip looks like. I feel for you man, I really do.

By the way, you might want to get that burn looked at. Looks nasty :)

i can see the opponent smiling..when you execute the this type of kuncian & your opponent can still smile then you're not getting the 'seni' yet...focus on the opponent left hand during locking & you'll see the difference..sorry to leave this comment, doesnt meant to offence

Pull the opponent's left arm a bit to the right, while your right knee pushes his back hip (on his back spine sandwiched between his two kidneys) frontward. He will scream in pain.

For more brutal effect, pull him more backward into a big C. His back would be lying on your bent right knee. Then, shift the role of your right hand (which grabbed his left arm) with your left one. Your right arm is now free for executing 'finishing touch' to your opponent.

You may use a blade from your FMA training to slit his throat or stab straight to his heart.

Okay I mean, "SUBSTITUTE the role of your right hand..."

Damn, I should learn advanced English from now.