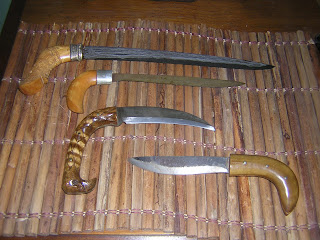 Some badik(s) from my collection:

The Badik is a traditional dagger which originates from the coastal tribes of southern Sulawesi such as the Bugis and the Makasarese. Because of their trade relationship with other tribes, it has reached the coasts of Sumatra, the Malay Peninsula and to some extent Borneo, Java and Bali.

The blade can be in iron, steel or pamor. It is also believed the Badik has mysterious power such as for the Keris.

The Bugis Badik has a 90° pistol grip with round edges, whereas the Makasarese badik has a 45° conic pistol grip. The Sumatra and Peninsula Badik is very similar to the Bugis.

The Badik is also part of the traditional clothing and is wear by the bride for the wedding ceremony in Sulawesi or Sumatra. It is worn in front of the stomach into the pleats of the sarong.

One of the traditional way of fighting with the Badik is to have the two opponents enclosed in sarong with a Badik in a hand while the other hand holds the sarong with no possibility to escape.

There are some nice comments on the forum about these. They kind of look like short sword cane handles.