The Rolling Tiger of Banten 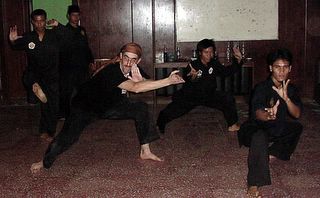 The bonds between Michigan and Biarritz are strong. In the near future, I will be working more closely with the noble Basque warrior Gorka Echarri. I asked him to post a little about his practice on my blog, and it is with pleasure that I reproduce his article here. - JD

My dear brother Jeff asked me to write an article about Cimande...
This really nice offer put me in an odd situation because I've seen in the past that this word "cimande" is the subject of so many wars between schools in the "western part of the world". Anyway, I'll try to share my little knowledge and my personal experience, hoping that it will be able to clear the path of some true seekers.

To start I've to be really clear about the word Cimande. There is a saying in the pencak silat comunity that says that Cimande is like a broken glass. When you drop a glass on the floor there are a hundred pieces of glass on your floor but none of these pieces can say "hey ! I'm THE REAL glass" in truth all of them are the glass. In the same way, Cimande is like the broken glass and each school of Cimande is part of the same art, and none of them can say "hey ! I'm THE Cimande".

The Cimande style that I've been taught is called Cimande Macan Guling. Cimande is the name of the style and Macan Guling (Rolling Tiger) is the name of the school. This school is very famous and very well known in Serang. They're under the authority of the PPPSBBI (Persatuan Pendekar Persilatan Seni Budaya Banten Indonesia) a very famous regional organisation. PPPSBBI has got 500 000 Silat players in West Java with 90 different styles. This organisation has been created in 1971 by Pendekar H. Tubagus Chasan Sochid a very famous man with a big charisma and a great influence on Banten region. PPPSBBI has been created to protect and develop all the traditional Pencak Silat styles from Banten (what they are doing is great...). In Cimande Macan Guling we've got jurus (codified movements), Langkahs (codified steps), Kelidans (arms game to develop reflex, hardeing the arms...), Golok (machete) jurus, pisau (knife) jurus, toya (staff) jurus, sarong jurus... Its a very wide style with a lot of material to learn.

Beside this technics knowledge there is 2 rituals very important that are done to accept a new student within the Cimande Macan Guling family. The first one is called Pangurutan or Urut. It's a ritual during the one your arms are beaten hardly by a top teacher (guru dewan) with a ritual oil, a flower bath and prays. This rituals has to be done 7 times. The second ritual is called Keceran it's a ritual that is done once a year during which you receive drops of a sacred water in
your eyes. In Cimande Macan Guling, there are a lot of "great teachers" (guru dewan) and each of them has a speciality (the pangurutan, the kelidans, the jurus...) so when I go there I often train with several teachers and it can give me a large view on this great style. I hope that this short text can help the true seeker to see clearer in the wide world of Cimande

Thank you Guru Gorka. How many schools/classes do you have in France? I try to make it to Ibizia, Spain to train with Tuhon Gaje, and I would like to come and meet you one day, and see your techniques.

Guru Jeff knows me and can vouch for me, I hope!

We have 3 schools in France (Lille, La Rochelle and I teach in Bayonne close to Spain).
You'll be always welcome if you want to come to train with us. Just let me know...

Happy to read you soon

Cool article. Guru Gorka, does your art have progressive levels of training? Like in Tekpi, there are 5 levels, for example that build upon each other.

Thanks for your question.
In Banten, they've 2 different ways to do in ths chools.

First one : they use the "belt levels" progression (this way to do is coming from the japanese influences.

The second way to do is the one I'm using in my schools : The guru teachs to his students and when the tearcher consider that his students is ready to teach, he just tell him "Ok, now you're ready, you're a guru". This method, in my point of view, is a lot much better because the guru can "test" his student during all the details of his life, testing is character, his loyauty, his heart's quality.....

I hope it gives you a clearer view of our art

I would like to add that all this accomplishments in cimande macan guling and terumbu gaja putih wouldn't have been possible without the help of my blood-brother Mas Martin Notohardjo who did (and do) so much for all of us here in France.
Thanks so much to him

How true...Martin and Reno have unselfishly opened many doors and made many connections for us!