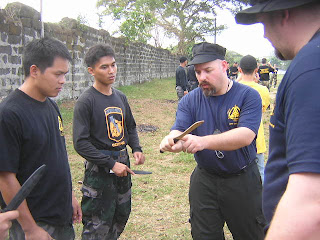 I have been studying Pekiti-Tirsia Kali (PTK) directly with Tuhon Gaje for 11 years. I studied PTK with other instructors prior to this, and I continue to learn from my own ‘older brothers’ in the Art in various parts of the country. Over the years I have seen many ‘interpretations’ of PTK from various teachers. Some I consider inspired and innovative… some I can’t even stand to look at. That which I like, I embrace. It makes me sad when I see people claiming “official” this or “authentic” that. I just look at how the person moves…either he gets it or he doesn’t.

At this point I cannot say for certain if there is actually something that could be called “Pekiti-Tirsia knife fighting” per se. Of course, there are certain drills which are usually trained with a knife, and given the fact that very few practitioners ever seem to progress beyond merely learning/performing the drills, these exercises have become “fossilized” to the point where folks think that the drills are the system. That’s bad for our Art.

I have said time and again that (at least in my opinion) Pekiti-Tirsia is two things:

If you understand these, then (in my opinion) you are doing Pekiti-Tirsia. I have two particular (new) students that both previously trained in Wing Chun. When I watch them perform a certain knife drill, it looks like Wing Chun with a knife. Sure, they are doing the drill – but are they doing Pekiti? Likewise, many new students who come to me with previous training in other martial arts are sometimes thrown for a loop because while we have several techniques which are also found in many different systems, we don’t execute them in nearly the same way. What makes a Pekiti-Tirsia inside-wrist-lock different from a Jujutsu inside-wrist lock? The answer is found in the above two points. Add to this the fact that PTK drills have been co-opted or pirated into just about every FMA school in the United States since the 70’s, and you have a wide variety of people doing our drills while not looking anything like we do. Whether their own interpretation is good or bad, I leave to your own discretion.

The bottom line is that someone who has been trained in Pekiti-Tirsia will move, react, and think in a certain way regardless of what weapon or combination of weapons they are using at the moment. As an example, my student Panday who was already an accomplished handgun expert, has developed an approach to tactical pistol training which is pure Pekiti-Tirsia. If you were to watch him at work with a pistol, and another of my students with a knife, you can clearly see that they are doing the same system.

At the end of the day, we can say this for certain:

- Tuhon Gaje was one of the first to introduce tactical knife into the milieu of FMA and martial arts in general in the United States.

- The idea of a PTK “knife fighting style” is misleading.

So you are saying that Pekiti Tirsia is a style not a system?

I'm not saying that. Pekiti-Tirsia IS a system. I'm just suggesting that it should not be defined by a particular technique.

So then how do you teach it?

I teach what Tuhon taught us the way he taught us.