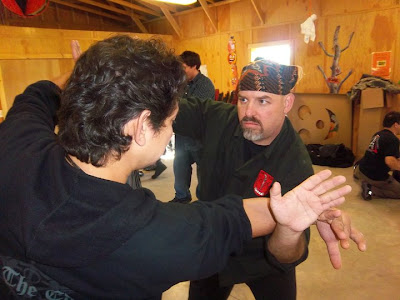 May I have this Dance???

We were delighted to have a rather large group of beginning students present at this year’s event. Following lunch on Saturday afternoon, after a full morning of training under the clear, crisp sky of upstate New York, Kuya Doug arranged for each instructor to give a brief demonstration/overview of their respective discipline(s) for the benefit of the newbies.

It could not have been worse for me…

Imagine! My presentation had to follow behind three virtuosos: Ama Guro Jun de Leon, Tito Jun Saludo, and MM Rommel Tortal. Well, at least I had more time to prepare, right? But no sooner had I centered myself mentally, than Rommel called me up to assist him in his demo. For the next 15 minutes (which seemed like an eternity) I was punched, stomped, thrown, choked, locked, swept, twisted, and handcuffed in every conceivable way, with every weapon that Rommel could put his hands on. I was not quite 100% when my turn came immediately after that, so if you were there I beg your forgiveness if my presentation was somewhat less-than-coherent. I’ll still probably need an MRI sometime this week.

Anyway, if I had another 15 minutes to address the audience, I would speak about what I consider to be an all-to-often overlooked aspect of Martial Arts practice, and it was inspired by a discussion I had with Ama Guro Jun De Leon over a cup of coffee on Sunday morning.