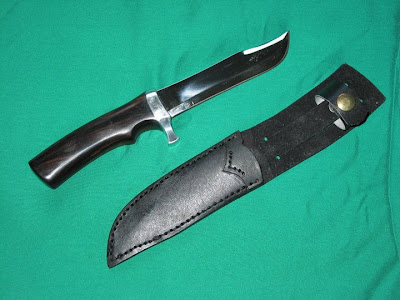 Knife for Batangas Style - custom made in the PI

The same reckless curiosity that led to my involvement with Filipino martial arts in the first place took hold of me at that point, and I unobtrusively pulled myself away from the seminar and approached Jay Saludo’s Dad there on the sideline.

“Mister Saludo can I get you anything…some water maybe?”

To this day I can neither forget, nor exactly describe the particular feeling that went through me the first time that “Jay’s Dad” addressed me directly – but it made me wonder if I hadn’t just made a very big mistake in walking up on him like that.

“Are you enjoying the seminar Mister…er…I mean Tito Jun?”

“It’s okay. It’s nice to see all you boys together.” [I half expected him to pat me on the head…more very uncomfortable silence]

“Do you also study Kali, Mister…er… Tito Jun?” [I swear it was an innocent question]

Some people can communicate an entire range of thoughts and expressions using only their eyes. Right then, Tito Jun was looking at me as if the most ludicrous, most outlandish, most preposterous, and wrong-headed casual assumption that I could ever consider – even for a minute – was the patently outrageous idea that he practiced Kali or even took the slightest interest in it beyond his son’s involvement.

Did I say something wrong? Whoops. Time to get back to the seminar, I thought.

Before I could slither away back to the main group, his expression softened and he said quietly, in a deadpan voice: “Ka Jeff, I am not a great martial arts Master like he is [pointing to the featured instructor]. I don’t even practice martial arts.” There was the slightest trace of disdain in his voice.

And then: “The way we used a knife where I come from is a lot different.”

I considered that last statement. If a Filipino belonging to the “older generation” just told you that he doesn’t practice or care about ‘martial arts’ yet has his own ‘way’ with a knife – what do you think that might mean? Well…draw your own conclusions. I did, and just like he was reading my mind, Tito Jun slightly nodded as if to confirm that I wasn’t mistaken on that assumption. Then I took a big gamble:

For a few more uncomfortable moments, he stayed silent and seemed to be weighing the situation. Finally, he looked around. “Is there a more private room we can go to ka Jeff?”

Did Panday make that knife?

Actually, this is one of the few knives I've featured on this blog that was NOT made by Panday.

Jeff
Jake here, new to your site which is awesome BTW! I am enjoying reading your account, and perhaps I am jumping the gun a bit here, but what exactly is Batangas KNife? I cannot find ANYTHING on line about it??
Thanks
Jake

@Tony: You're right for the most part. I don't come out looking so good at the end of this little tale, but it could have been a lot worse.

@Jake: There is not much if anything online about this. If you can stand to keep reading my posts you'll understand why very shortly. Thanks!

Jeff,
Have you ever considered writing a book about your Silat/Kali journey? You have enough material and can obviously write. I know your not the type to grandstand and say,"Look at me, look at how great I am." Your commentaries about yourself, your opinions and experiances have always come off as honest. My only criticisms are that sometimes you place your mentors on too high of a pedastal but that's understandable. Most students have nothing but respect and admiration for their instructors.

I think people would in the Silat/Kali community would read your book if you ever choose to write one.

To "Anonymous" who left the comment about a book...I was attempting to publish your comment but I think I deleted it by accident, sorry Brother - it's been that kind of morning.

But you had a good suggestion. If you would be a potential reader I have a few ?'s for you. Email me if you feel so inclined.