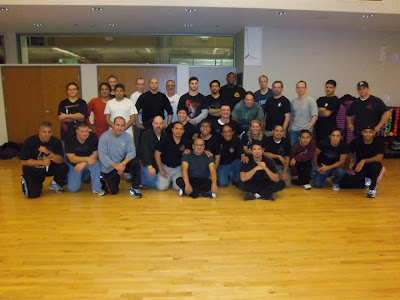 We have just returned safely from Rochester, New York, where the most recent annual gathering of Brotherhood of the Blade took place.

As readers of this blog will already know, the Brotherhood of the Blade was formed in 2003 by Kuya Doug Marcaida of Rochester, Ka Jay Saludo of Saskatchewan, and me here in Detroit – with the full support and blessing of our Grand Teacher Leo T. Gaje Jr. In those early days, it was The Pekiti-Tirsia Brotherhood of the Blade. However, a few years ago we decided it would be proper to ‘amend’ the name of our Organization, because in truth it is bigger than one system. Those whom we humbly consider to be our Mentors include Ama Guro Jun De Leon of Kali De Leon and Manong Leon “Tito Jun’ Saludo of Barako Batanguenio. The Arts that we have dedicated ourselves to studying hail not only from the Philippines, but also Malaysia and Indonesia. Remember, in the distant past, the entire Malay Archipelago was essentially part of the same empire.

Once again, it has been our distinct honor to support our Kuya Doug Marcaida, - who embodies the Spirit and Vision of the Brotherhood. Kuya Doug masterfully outmaneuvered some terrible last-minute obstacles in planning and executing this year’s Gathering, which brought together students and teachers from literally all over the World. We are all proud to call him our Leader. Mabuhay!

This year, we were duly blessed to have as our Special Guest Instructor none other than Mandala Maginoo Rommel Tortal – the esteemed Master of the Pekiti-Tirsia system of Kali, and nephew of Grand Tuhon Gaje. You’ve seen Rommel on the Discovery Channel, National Geographic, the BBC, and in the documentary movie Kali Means to Scrape. A lot of folks from all over the world come to the Philippines to train with him, and we are proud and thankful that he spent so much time with us on his monumental first visit to the United States. Honestly, we know that Tuhon Gaje will probably live forever, but when the time comes for him to retire from teaching his beloved Art, I think there can be no question that the torch will pass to Rommel as the undisputed heir of the Pekiti-Tirsia Kali system.