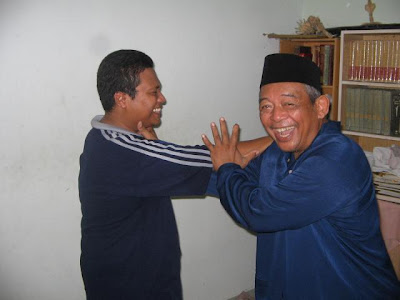 There is some confusion here in the West surrounding the term 'Kuntau' in Silat Melayu. I asked my dear friend, the incomparable Saiful Azraq, to provide a brief explanation for the edification of us Westerners. Below are Saiful's words:

The word Kuntau itself means many things to many different people in many different areas. This has been expanded and discussed in other forums as pertains to the Chinese origins of the word and art, which later spread to Indonesia. I won't pretend to even understand that aspect.

However, what I can do is tell you what the word means to many Malaysians.

As far as my surveys go, the word Kuntau in Malaysia can refer to one of three core ideas: A) a purely or mostly Chinese-originated style b) a syncretic Chinese-Melayu style or c) a purely Melayu style with mostly hard aspects.

The first core idea refers to any Chinese style now popularly known as Kung Fu. Before the word was popularised in Malaysia, Kuntau or Koontow was the norm. Because of the relative hardness (to silat) of the styles that came to the country via immigration, all Chinese art became known by the blanket term Kuntau.

The second core idea refers to any Chinese style absorbed into a Melayu silat style. One example is Silat Sendeng Malaysia. According to guru Jamaludin Shahadan, President of Pertubuhan Seni Silat Sendeng Malaysia, the present day Sendeng style promoted by the organisation is a marriage of many different hard styles by its founder, the late Haji Abdul Hamid Hamzah.

Of Bugis descent, the founder's own family were inheritors of a version of Kuntau, a Chinese art modified by the Bugis long ago (and its seems, many other cultures within Nusantara as well) into an accepted silat style. He studied and reclaimed Sendeng, a traditional Bugis silat style which fights with a lead shoulder, which was a natural complement to his Kuntau studies, which fights with no lead.

However, Silat Sendeng Malaysia, to this day, is known by only its Melayu name, since the Kuntau aspect is only taught as the beginner phase while Sendeng is meant to be the final objective of the studies.

(It's interesting to note that there are manu Sendeng styles today that pride itself on being 'authentic' in that they still only fight off the vertical rather than the horizontal, and Silat Sendeng Malaysia was regarded many years ago as being unauthentic).

The third core idea is related to the Melayu's idea of the hardness of kuntau. Thus, any silat style that bears very little softness as the Melayu are used to seeing, is labelled Kuntau, even though the art itself was not born of Chinese elements.

One example is Silat Kuntau Tekpi (SKT), which shares some technical and historical background with Silat Cekak (of Ustaz Hanafi fame) and Silat Kalimah. The word 'Kuntau ' in SKT, is according to present Pak Guru, cikgu Sani Zainol Abidin refers to the hardness of the techniques and not its origin. This was a decision made in the 1960s, when he was forced to register the art as such, because another art was already using the moniker 'Silat Tekpi'. Otherwise, the original intention was to call it Silat Tekpi too.

The original Silat Kalimah syllabus and the present Silat Cekak syllabus both contain buah which have the word Kuntau in it. When Ustaz Hanafi was asked as to why this was and whether the art absorbed Chinese influences, he replied that all it meant was that these techniques contain hard forms. The word implied this.
Posted by guro jeff davidson at 9:28 AM

You and I spoke over the phone before new years'. I have a ? about the Silat Kuntau Tekpi. I notice the instructors camp is only a week. Is it possible to learn the whole system in that time?

I remember you! To answer your question:

First of all, the "whole system" ain't whats being taught. You would learn Senaman Tua (which alone is worth the course)as well as 42 buah kuncian (locking buah) that make up the 1st and 2nd levels of the Art and 6 buah pukulan (striking buah) from level 3. That is well within the parameters of one week. Will you master it in that time? No. But you will have enough to work on, teach, and refine for at least a year and a half.

I wholeheartedly recommend the instructor's course. Please consult directly with Cikgu Omar. He will more than take care of you.

Thanks for the kind words Jeff! :-)

That is well within the parameters of one week.

But you will have enough to work on