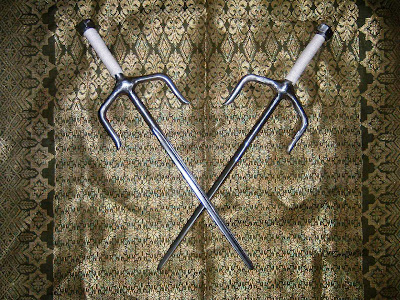 For the past several days, my constant companions have been two battle-ready Malaysian Tekpis - expertly forged by the hand of Cikgu Jamaludin Shahadan - president of Pertubuhan Seni Silat Sendeng Malaysia.

One of the most interesting aspects of this pair is that they are not identical. While one is more or less standard for Malaysian tekpis, the heavier of them could accurately be described as a “Buginese War Tekpi” having a unique belimbing (“Star Fruit”) shape to the blade. More descriptive photos will follow later. Cikgu Jamal renders it in English as the "Rapier Tekpi".

The certificate which Cikgu Jamal issued along with these superb blades reads thus:

THIS WEAPON IS CRAFTED BY ME USING BASIC TOOLS. THE BLADE IS FASHIONED FROM HIGH CARBON STEEL AND SO ARE THE PRONGS. IT HANDLES BETTER, STRIKES AND BLOCKS QUICKER, CUTS LIKE A SWORD AND STABS LIKE A DAGGER. I HEREBY TRANSFER THIS PAIR OF TEKPI TO JEFF DAVIDSON

My undying gratitude to Cikgu Jamal for forging these weapons, and to Cikgu Lan for going so far out of his way to help a "junior brother".
Posted by guro jeff davidson at 10:03 PM

I just clicked on the pic for a close up. Yikes! Stay away from me with those.

Andrew
(btw, I wish you much success this weekend)

First, thanks for the good wishes. Second, I have you scheduled to be on the receiving end of Bapak Kucing and Radak Maut - with these!