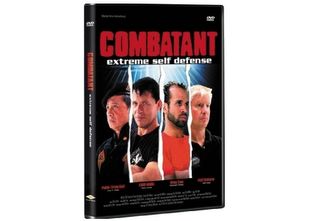 From time to time I’ll be reviewing videos/dvd’s relating to various subjects discussed in this blog. The material will tend to be of an instructional or documentary nature, although once in a while I’ll throw in something of a more mainstream genre if I feel it has something to offer beyond just entertainment value.

The first review is something I’ve received a lot of emails about. This is basically a reprint from our private Pekiti Tirsia forum for the benefit of those who do not have access to that forum.

The ‘Combatants’ dvd is a Compare-the-Styles piece featuring the following teachers:

which offers the following synopsis:

If you are an experienced martial artist, you'll want to see how each art handles the same situations differently and WHY. These arts are very popular arts for cross training and are known as being focused on the street.

Four Masters of some most street effective martial arts show you their different theories and techniques on defending yourself from common attacks.”

Now keeping in mind that most of the emails I’ve received are from folks who have already seen the video, and want to know my opinion of it, here it is:

I was not particularly impressed by the Wing Tzun and "Fast Defense" presentations.

The only thing notable in my opinion about Commando Krav Maga is that whereas most of the Krav Maga that I've seen looks like bad 3d-rate Muay Thai, this stuff looks like bad 3d rate Japanese jujutsu. I'd rather learn those exact same moves the correct way from a good Jujutsu teacher. But I did indeed get the sense that the teacher could handle himself in a fight.

I have mixed feelings on Tuhon Gaje's presentation. The thing I've noticed about Tuhon and "demos" like this is that he's too self-conscious in front of the camera. When he does a combination where he has to explain the moves in English- like in the first part of the dvd - he's not only thinking about what he's doing but also thinking about how to explain what he's doing, and the technique gets lost in that process. His later presentation where he just flows and lets loose on Tim Waid is a lot cleaner and more fluid.

On the positive side: It’s a rare and wonderful thing to see teachers of different backgrounds collaborating on a project. I also think this is a great concept for a dvd, and I wholly respect the efforts of everyone involved in the production.

I'm sure the next offering will be a lot better.
Posted by guro jeff davidson at 2:00 PM