The Most Fun Demo Ever 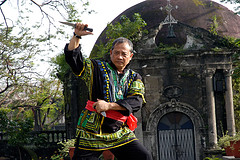 Last weekend we gave a demo at a huge banquet hall in St. Clair Shores. I would love to post some pictures here, but my crappy digital camera malfunctioned* Being that there are no pics from our demo, I decided instead to post this cool shot of Tuhon Gaje in "High Priest" garb (the Discovery Channel is filming a documentary on FMA in the Philippines which will feature Pekiti Tirsia prominently - this photo was taken during that filming).

Anyway, for this particular demo Kapatid Damon Mitchell was arguably the Star of the show, if not the entire night. After nearly killing us all with his homicidal driving on I-94, then antagonizing the waitstaff and house security to the point of a near confrontation, he performed a breathtaking sayaw with a single bolo, followed by Contradas and an excellent rendition of Kali De Leon's "Tic-Bang" double stick drill - which turned out to be a real crowd pleaser.

Congratulations Damon. And as always, thanks for keeping it real.


* Its Christmas/Hanukah/Kwanzaa time...a new digital camera is on my list!
Posted by guro jeff davidson at 9:51 PM