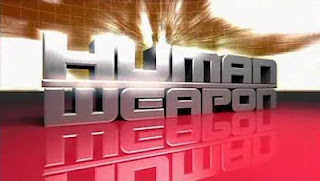 You guys may remember an "entertaining" show a few years back that had two American nincompoops traveling to foreign lands in order to learn and compete in the local martial arts.  The complete episodes are available online from various sources.  If you're bored at work, you may want to peruse the episode where our two heroes journey to Malaysia to fail at our beloved Art of Silat.  Below is a review of that particular episode by our friend Nadzrin. - JD
"Silat: The Martial Art of Malaysia" started off well enough with a view of the 50th Malaysian National Independence Day parade. Hosts Jason Chambers and Bill Duff sauntered over to a Silat Seni Gayong demonstration, seemingly held in commemoration of the day.

There, they are issued a challenge by the Gayong master in attendance, guru Malik, to study several styles throughout Malaysia, and return to face six of his best fighters. Now, this is obviously set up, since the whole premise of the Human Weapon series is to train in various styles and eventually meet up with the first style they feature for a challenge match.

Among those they would train with were: Silat Seni Gayong, Silat Lian Padukan, Silat Melayu Keris Lok 9 and Silat Harimau.

The problem is, there was no one here who thought that this was a good idea. The moment word got out, I started receiving calls, SMSs and emails from friends and strangers who demanded to know, who these arrogant Westerners were, and where they could be found. What the camera never recorded, was how many people actually offered themselves, thinking it was a real challenge to silat as a whole.

Needless to say, I told them honestly, I didn’t know. Although I was originally part of the project, but scheduling problems forced me to sit it out. What a mistake that was.

The whole episode did a good job of introducing different silat styles to the public. However, almost immediately after the show aired in America, forums buzzed with the inanity of the weak showing of Malaysian silat. That, and the fact that Jeff Davidson switched off the television before the episode ended filled me with curiousity. What the hell happened? I intended to find out. So, after a kind blog fan posted the download links, I spent the next 3 days downloading the episode and lo and behold, not only did I see the corn, I tasted it as well. Because, if the American martial arts community pooh-poohed it, then the Malaysians are definitely not going to be happy, especially those who were interviewed.

For a cable channel calling itself History, there’s a lot of research that they missed and it’s obvious they were careless in quite a few facts. Below are some of the more glaring errors I managed to catch:

"We’ve travelled to the island nation of Malaysia"
Malaysia is not an island nation. It’s made up of a peninsula extending from the south of Thailand and half of the Borneo island.

"Seni Gayong is taught to all 9 million members of the Royal Malaysian Police Force and military"
Firstly, Gayong is taught to the Police as Silat Polis, a combination of Gayong, Judo, Aikido and Karate. Secondly, the military has no silat syllabus, only Taekwondo has only ever been an official insertion. The official method is still only called TTS, Tempur Tanpa Senjata (Weaponless Combat). Thirdly, 9 million members means that every third person in Malaysia is in the civil service. Fourthly, this figure contradicts the 1 in 5 statement in no. 2.

"We climbed into a traditional Malay boat and headed to Putrajaya"There’s no way you can take a boat from Kuala Lumpur to Putrajaya. Literally, there is no water route.

"And Filipino eskrimadors lent aspects of their weapons work and empty hand forms to silat"Not an offensive statement, just that it’s the first time I’ve heard it, and is yet to be proven.

"But in 1969, this cultural melting pot reached a boiling point. Malay and Chinese rioters fought one another in the streets of Kuala Lumpur with bladed weapons, farmtools and silat. In the end, these riots left some 6,000 people homeless and claimed over 200 lives. In the aftermath, both sides incorporated what they’ve learned from the other into a hybrid style that infused Chinese Wing Chun techniques into traditional silat. It’s called Lian Padukan."
Anyone who even casually browses the Lian Padukan website will know that this is untrue. Lian Padukan was formed long before 1969, when Pak Mat Kedidi studied Buah Pukul from guru Cu Aman and integrated it with Silat and Tomoi. The absorption of the Chinese element itself happened in 1897, when the founder of Buah Pukul, Awang Daik studied it from Syed Abdul Rahman al-Yunani.

"Together, they formed just the move that Bill and I were looking for, the Polick Haimau"I have confirmation from guru Yazid that there's no such thing as a Polick Haimau. Polick here refers to ‘Polek’, but I can’t figure out where they got Haimau from.

"Is this the type of silat that the people used to defend themselves at this port when they were invaded?," asks Jason and guru Azlan Ghanie answers, "Sama ada dia berpenyakit ataupun tidak berpenyakit" (Whether he is diseased or not) and his student-cum-interpreter replies, "Yes it is" (By the way, guru Azlan speaks excellent English)
It is obvious that the three scenes were spliced together, just to get a reply from guru Azlan, irrespective of what he really said. I guess the editors hoped Americans would know no better.

"Coupled with the silat skills of the Malay warriors, the keris helped Melaka fend off the better equipped, more heavily-armed Portuguese soldiers for more than 40 days"
Not necessarily untrue, but the statement could be misleading. Melaka actually had a good amount of cannons defending its city and was not wanting in warriors. However, it has been agreed in many circles that bad management and infighting caused the Melaka empire to fall, not the lack of firepower.

There are dozens more that I could go on and on about, but I’ll stop here before I start boring you to death. My only worry is, if this happened to silat, how much credibility do the other episodes have?