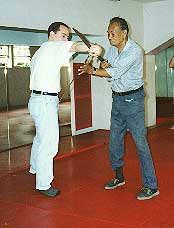 This is a much discussed and debated topic of FMA. Technically, they are not weapons, but to the extent they can protect the owner from harm or wounds, or confuse or incapacitate the enemy, then they become accoutrements or instruments of war or combat. We are talking about amulets or charms (anting-anting) and prayers (orasyones).

Amulets are physical, such as human bones (sometimes dug up from graves), special stones, etc., while orasyones are special incantations, with spiritual attributes or powers, attributed to God with overtly religious references, oftentimes with specific goals, i.e., to confuse the enemy, to make the owner impervious to weapons, etc.

A most notable Grandmaster who believed in this was Antonio “Tatang” Ilustrisimo, who carried an amulet and had an “orasyon” tattooed across his chest. It must have worked for him, since he survived a lifetime of death matches and violent street encounters to live to a ripe old age of ninety-three."

Or he just practiced alot, had great skill, wasn't a scam artist and had faith in himself. Plus he was legitimate and most likely didn't have to put everyone down in order to make up for his shortcomings as a human being and martial artist. He will be remembered while some will be forgotten.

I believe his amulet or "orasyon" tattoo provided more of a psychological advantage then a supernatural edge. The belief system is a powerful motivator which can enable individuals to do pretty remarkable things. I believe this combined with decades of training and experience is what gave Grandmaster Ilustrisimo an edge over his opponents (plus good genetics for longevity), not some mystical power. Just saying.

@ Anonymous #2: Ok smart guy...lets see you rationalize my NEXT story.

By the way, I have absolutely no affiliation with Grandmaster Ilustrisimo. Never met him, never studied with him. I'm just using him as an example here!