Approaches to Teaching and Learning pt. 3 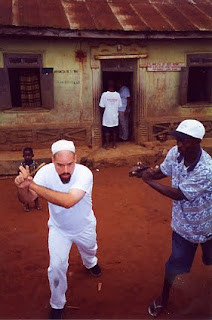 The Impression Method (IM), which is technique or buah-based, relies heavily on the impression of the syllabus upon the mind and physique of the student.

This involves the creation of standardised blocks of movement with a set beginning and an end. The student begins with nothing and is taught to mimic and act out the blocks and eventually string them together.

The key characteristics of this system is the initial rigidity of the process, the stressing of reflex as against analytical thought and the belief that a particular block of movements (often termed technique) are a result of strenuous research and is the best possible answer to a particular incursion.

Although the term ‘buah’ is also used to describe any strikeform that makes contact with the opponent, even if it isn’t a reflex action but a result of strategic analysis, most modern Malaysian Silat styles subscribe to this impression method to achieve immediate results.

The advantages are numerous. It keeps the student’s attention focused upon the apparent physical goals of silat: that is learning how to fight. It creates a realistic setting in which the student learns: reacting off a partner who is simulating violence.

It also allows for minimal supervision of a large group: several instructors could monitor a group of hundreds. It allows for training of large numbers of students in a short span and it also produces immediate results: The student usually apply the technique drilled into him almost immediately.

This sounds like a good way of teaching when there is a language barrier. Which is almost the situation that you find yourself in with beginning students, due to the specific terminology used by the different systems. Thanks.