Approaches to Teaching and Learning pt. 1 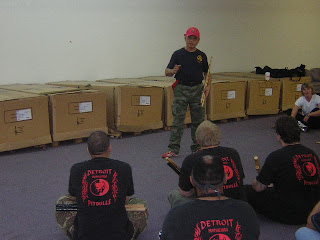 Learning from the Master

We'll resume the knife discussion soon. In the meantime, we had an out of town visitor last week. A gentleman came to train with us from the West Coast who very little in the way of previous experience. I only had a few days to teach him, and I had no gauge of his ability nor capacity to learn. I wanted him to have the best, most fulfilling training experience possible under the circumstances, and I considered what would be the best approach to teaching under these parameters. In that spirit, I want to share an article written by my brother in Malaysia - Mohd Nadzrin Wahab - in serial form as promised...

It is a standard scene. The student has come here to study silat. He harbours a personal goal in wanting to be able to defend himself. It may be for revenge, for protection, for self-development or simply for recreation.

He sees the other students milling about, talking about things other than martial arts until one of them becomes aware of the teacher approaching. He is the first to stand at attention followed by the others.

The teacher says a few words and indicates the beginning of the class. The students salute the teacher, their friends and begin training. Here, the commonality of this scene fractures into three separate realities.

In one reality, the teacher asks one of his students to strike him in the chest. One obligingly does and is met with an evasion and a parry, a strike to the vitals, usually just indicated, followed up with a lock or takedown.

The teacher then repeats it a few more times, ensuring they remember what they see. Once he is satisfied, he tells them to copy his exact movements and apply them on their partners.

End of scene one.

In a second reality, the teacher has prepared his student for months in the field. The work he does on the farm has given him proficiency in his physique.

When he executes the wardance, it is something neither master nor student has seen before. It comes naturally to him, and yet, each blossoming of the hands and prancing of the feet are calculated, as if reacting to an unseen enemy.

Every angle is in his control, every imbalance correctable, every muscle in its proper place, every beat of the accompanying rhythm matched note for note. His movements are both pleasing to the eye and intoxicating to the self.

In a third reality, the teacher sits in front of his student and clasps his right hand, or recites some verses into a glass of water, which he drinks, or pats the small of his back, or, or, or... Almost immediately, the student feels empowered, as if his sinews have been charged by a battery. He is pit against a senior student and they fight.

He defends successfully against all his senior's attacks and manages to beat him back and wins the round. He has never studied a martial art before. End of scene three.

Three foreign students who come to Malaysia with the specific intention of studying Silat Melayu may get a shock of their lives when they meet each other at the airport to compare notes on their way home.

Each of them has trained in a different system with different methods and has been indoctrinated with a different idea of what silat is. None of them can comprehend what the other is rambling about because the methods they studied make no sense. Is this a familiar problem?