In April of 2005, I was blessed to be among the first group of ‘Cikgu Muda’ to complete the first two levels of Silat Kuntau Tekpi during an intensive training camp hosted by Cikgu Omar Hakim in . It was literally a breathtaking experience, learning the basics of footwork, parrying, locking, throwing, striking, theory, and application of this venerable, no-nonsense Silat system from . Away from home and with few distractions, it was almost like a vacation – except for the fact that I was battered, twisted, and exhausted at the end of each day.

Equal in value to any of techniques I learned were the friendships that grew from that experience. Two of my senior classmates in that training group made a tremendous impression on me: Robert Slomkowski and Ricky Rillera. These two gentlemen have a lot in common, beyond the fact that they follow similar paths in the martial arts. You will not find a more perfect example of what the Silat masters call Ilmu Padi – The Way of the Rice Plant – than these gentlemen. The Way of the Rice Plant is thus: when it is young, it stands straight and proud – almost with arrogance. However, the older and more full (wiser), and developed it becomes, it humbly lowers its profile. That’s Robert and Ricky.

After a grueling day of Silat practice, we would eat dinner close to the training facility, and then somewhat informally practice Kali at night. I’m sure it was nothing special to them, but these guys blew my mind. Ricky is a legend in Pekiti-Tirsia circles. Facing him with a baston even doing a simple exercise felt like standing in front of an exploding pipe bomb. More importantly, behind the technique is a calculating, strategic mind that controls the fight like a chess master runs the board.

Robert is much the same way, although his personal style is somewhat different than Ricky’s. I distinctly remember thinking – as he blasted me with three solid kill-shots before I could get off one angle – that my best hope would be to get knocked out by the first crack and be spared the pain of the following volley. At one point, Robert was kind enough to show me a grappling drill that he developed, which made me feel as if my spine was made of rubber. Ah memories!

Although I was certainly the low man on the totem pole, and knew next to nothing compared to these guys, both of them taught me with patience and generosity as if I was their own student. As I flew home at the end of the training camp, I made two resolutions:

1. I resolved that one day my own students would have the honor of meeting and training with them; and

2. I prayed that one day, I could share something with them that was in some small way comparable to what they had taught me.

A few weeks ago I seemed to have achieved both objectives. After much planning, I came out to with a small contingent from our group for 3 days of training with the newest members of The Brotherhood of the Blade. It was great to see my old friends again, and also to make some new ones. It was a proud moment for me to be sharing Pekiti-Tirsia, Silat Melayu, and Batangas knife fighting with the young lions of , while at the same time on the other side of the gym, Ricky and Robert terrorized my own students. It was heartwarming.

I’m really looking forward to the next time we see these guys. I have a feeling that they will be doing our stuff better than we do it! 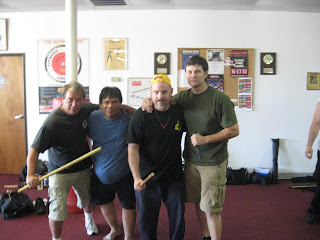 Kevin, Ricky, Me, and Robert 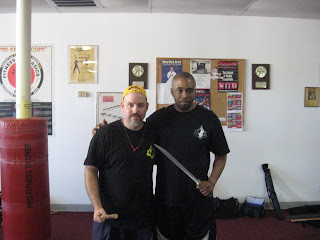 "Stop Pointing that Ginunting at Me, Doug" 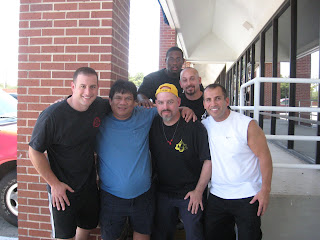 The Detroit Crew with Kuya Rick
Posted by guro jeff davidson at 9:25 AM

Thank you Jeff for your words of kindness, it was a huge blessing to have and your crew come to Texas and shares your vast treasure of knowledge with us and brave the hot Texas summer in the middle of August. Your Crew is very talented and knowledgeable; they are reflection of you being a great Teacher.
It was a pleasure seeing you again and forging new friends with the Detroit Crew. It was a wonderful seeing old friends, Kevin Jodoi from Austin and fellow San Antonio Pekiti Tirsia brother, Rudy Salazar come to the Seminar. Jeff you been a great inspiration to both Doug Marsh and Mark Dapilmot. They have been the main driving force for the San Antonio Brother of Blade. It is through Doug hard work that made this Detroit / San Antonio Workshop possible.
It was especially delightful seeing my best friend and training partner of 21 years, Robert open up and teach for hours He is usually very reserve. I am always amazed seeing his broken energy and explosiveness. He is defiantly “lighting in a bottle.” I will always be grateful to Robert’s friendship and his genius. The greatest thing I got from this Detroit /San Antonio Workshop was seeing the “imprint” that you and your students had on my Nephew, Zachary.
I hope we can in return make a trip to Detroit and in return for you experience the hot Texas Summer; we can experience the middle of winter in Detroit. Once again Brother Jeff thanks you and the Detroit Crew.

Congrats Man. I remember when you came home from Texas in '05. You've worked your a$$ off since then. It's great when a promise is fulfilled.

I am happy to see such a seminary. I met Ricky Rillera only once in my life, but his appearance can be compared to the flight of a meteorite. Those four days passed by like lightning and since then we have hoped to have him in Romania again.
God bless you all!