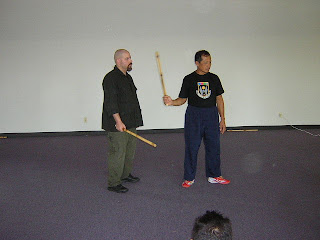 "This is going to be harder than I thought"

Sometime around the beginning of May we accepted a new student who had previously trained in Pekiti-Tirsia in another place some years ago. By his own admission, he did not get very far into his study. We started him off the same way we start off 90% of newbies, regardless of their past experience. After almost every class, he would say to me “This is great, but it doesn’t look like anything we used to do when I studied with ‘X’…uh, when do I learn the 12 attack system and break-in break-out?” My answer: “Maybe never.”

Some weeks later, I allowed this particular student to transfer some of our old VHS tapes of Tuhon Gaje’s training with us to DVD. He came back and said “You know, none of this looks familiar to me. It’s like it’s a different system!” Before I helped him reconcile this mental dilemma, I had a personal flashback to an earlier time, much like Caine in the Kung-Fu series. So fade out and cue the flashback music…

About 9 years ago, on a calm night in October, I sat in my living room watching an old Mike Tyson fight with my recently-arrived guest: Grand Tuhon Leo T. Gaje Jr. It was his first trip back to in many years, and as he sat intently boxing with my cat, and returning his emails – my mind was on other things… Ye gads, I thought. The Grandmaster of the Pekiti Tirsia Kali system is sitting 5 feet from me in my own house. I can ask him anything I want! Now is the time to clear up a few technical/training/system questions that have been on my mind for a few years now.

When I could no longer contain myself, I transformed from the silent disciple into the nagging chatterbox. Stick in hand, I assailed Tuhon with about 10 years worth of questions on various aspects of Pekiti-Tirsia: footwork, drills, techniques, disarms, grips, angles, sub-systems, terms, knife, stick, etc., etc. Ever the cagey one, Tuhon offhandedly dodged almost all of my questions with the irreverent sarcasm that is his sense of humor. As I studied his face, I could see a mixture of jet-lag, boredom, annoyance, and a definite tinge of disappointment which seemed to express the sentiment "This is going to be harder than I thought.”

Over the next 2 weeks, I had the privilege of many hours of one-on-one instruction from Tuhon. In the beginning, I assumed that the answers to my previous questions would be addressed at some point during our training sessions. I was wrong. Not only did our training NOT address my questions, but it had seemingly little to do with anything that anybody around here knew as “classical” Pekiti-Tirsia! When he instructed my other students during their private lessons, it was the same. I took a different track. When he would show me a drill or exercise I would ask “Tuhon, where in the system is this from?” His answer (accompanied more often than not by a painful slap or torque) was an exasperated “I am the system!” It was 2 weeks of this.

After Tuhon was on his way to the next venue, I had some time to reflect and I narrated my experience to an older and wiser friend – a Japanese-style martial artist who also had the opportunity to train under his system’s Grandmaster. His take on the situation:

“So…you had Miles Davis in your house and all you did was ask him how to play the solo from ‘Footprints”.

Now it made sense! What a gift we had been given. Instead of re-hashing set patterns from 20 years ago, Tuhon had actually given us building blocks for a complete foundation of theory, movement, application, and mindset. It was only later on, over the next few years, that the instruction from Tuhon took more of a structured approach. That’s pretty much the reverse of how most martial arts are taught. Our Art was fresh, it was practical, and the drills had ‘life’ instead of the feeling that we were merely repeating patterns. It was ours.

A little while later, we would go to Rochester, New York where we were able to observe another very-apart-from-the-crowd student of Tuhon -Kuya Doug Marcaida - a ferociously talented Kali player who completely embodies this idea of making the Art one’s own….and that set the bar for us.

So to my new student – as well as current and even prospective students – I say to you: Don’t come here expecting to learn Pekiti-Tirsia based on how you think it should be, or even how it used to be. Specific techniques, drills, blades, sticks etc. are important, but they are secondary to learning the most important weapons you will ever have – your own mind and body. It may seem like an indirect approach, but the rewards are much richer.

If you disagree, well, I’ll allow that I could be wrong. In that case, take it up with Tuhon. After all, HE IS THE SYSTEM!

Interesting post. I would like to know what some other Pekiti guys have to say on the issue as far as their experience. Do you apply that same process (or non process)to Silat as well?

Thanks for the question. First off, my blog post/experience/observation is related to a specific system - not necessarily an entire Artform.

As far as Silat in the United States goes, in my opinion it is less established now than Pekiti Tirsia was even 20 years ago. Also, everything I thought I knew about Silat changed completely when I met Mohd Nadzrin Wahab. Lets just say that I see a lot of people 'trying' to define and practice Silat into whatever they think it should be, rather than the other way around. I think it does the Art and the practitioner a disservice.

Do you get what I'm trying to say?

I study PTK in the Philippines under Mandala Mandatus Rommel Tortal and we do not memorize or even use the 64 attacks or doce methodos, we use the Tri - V and the outcome is still the same. I think the methodos is more for foreigners not Filipinos?

Well, technically I am a foreigner too! But you and just about everybody else I know who trains/has trained in the PI with Tuhon pretty much trains in the Tri-V. Tuhon has told me that he trains different people in different ways; and different people need different training methods. I guess it's good to be different!

Give my warmest regards to Kuya Mel.

The stuff we trained from 2 years ago is different than what we train today. Yet it is the same. I am very happy with it.

i am replying late, but this is an interesting post! i think that of course, over 30 years of development, the training style may change a bit. without a doubt anyone who trained directly under GT Leo got some of the best and most applicable training in the world, whether it was in '79 or '09. it may just have been "spoken" differently.

Thank you for the comment Anonymous. I agree with you about people who trained directly with Tuhon. They got the best training, and some took it farther than others.

I've the privilege of also being a direct student of GT. I used to often also ask him about this system or subsystem, that principle etc etc.
Ive stopped doing that. I think in his head he has a blue print for how he wants you to move. And he wants to see what you will do with what he gives you.
When i meet his older students, its like two different systems. But because of how GT has trained me now it makes it easier for me to pick up and apply the material that the older Tuhons have.
I now feel the best way to go to him is with an empty mind and lots of time :)