Memories from the Tekpi Camp 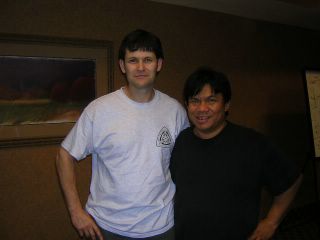 My main training partner during the Silat Kuntau Tekpi (TM) camp was none other than the legendary Pekiti Tirsia fighting machine Ricky "The Flying Punyo" Rillera from San Antonio, Texas. There was nothing better after an exhausting day of Tekpi training than to drill Pekiti in the hotel parking lot with Ricky and Robert Slomkowski - another "old school" Pekiti veteran.

Both Robert and Ricky are gifted with an uncanny sense of broken rythmn, and are in-humanly explosive with strikes and footwork. Robert has some of the best empty-hand skills I've experienced from any fighter - Pekiti or otherwise. One session began with the unlikely premise that Greco-Roman wrestling tactics can be applied to Silat (I admit I didn't give him the benefit of the doubt on that one) and progressed to several spine-jarring, whiplashing hands-on examples that more than made a believer out of me.

Ricky is also a student of the natural healing arts, and has an uncommonly broad understanding of internal energy. He has made some great innovations to traditional herbal formulas based on his experience with Holistic medicines.