The markings on weaponry offer a window to a culture’s aesthetical values and into the character of the weapon. This is what I learnt at the recent exhibition of traditional weaponry at the Kuala Lumpur Craft Complex, which showcased decorative art on classic weapons.

Reflection of the maker
According to Zainal Abidin Che Pa, director of Malaysian Handicraft Development Corporation’s Conservation Department, the decorative elements on traditional weapons differ from one weapon to another.

“Weapons made by the Melayu often carry floral motifs and those made by the Chinese feature turtles, bells or dragons. For the Indians, their design elements often feature elephants,” explains Zainal.

“Weapons that feature ‘heavy’ decorative markings were also used as accessories for special events such as weddings,” he adds.

The decorations often indicated the status of the owner. In the olden days, weapons with engravings complemented with gemstones usually belonged to nobility and dignitaries, or those in the higher hierarchy of a community.

Types of weapons
There are various types of traditional weapons. Among them, the badik, golok, kelewang, keris, sword and sundang.

The badik is a small dagger used for self-defence. It was widely used after the keris was banned by the British government. The badik’s blade is made of metal and the hilt of wood or ivory horn, decorated with gold, silver and brass. Badik was the weapon of choice for women in the olden days.

The golok is a machete used in battles. Its shape is influenced by the Javanese and European swords. The shape of its blade is slightly rounded and sharp on one side. There are a variety of golok — Golok Kelantan, Golok Bugis, Golok Perak and Golok Minangkabau, among others.

The kelewang is a shorter version of a sword. But its blade’s design makes it prominent. Popular in the East Coast states, especially in Kelantan at the end of the 18th Century, its length measures 0.6m. Its blade tapers on one side and the size increases towards the tip. The blade has two tips with oneside carved.

But the traditional weapon with the most extensive decorative elements would be the keris. This weapon is synonymous with the Melayu community. To some extent, it speaks of the Malay identity. Having been in existence for six centuries, a keris’ hilt has the most weight in design.

Carved by master craftsmen, the process of carving a keris can be quite complicated. The carving styles for a keris’ hilt involves several processes. Before the hilt receives its beautifying finishing touches, the craftsman will first have to do a low-relief carving to define the outer facet of the hilt.


Then the base motifs, which have been traced using carving blocks, will be defined using a wooden chisel. The hilt’s carving technique is very fine.

“Craftsmen believe that the keris is very special and mystical. It is not something to toy with,” says Zainal.

Besides the keris, the sword is just as special. Designs in the country are influenced by designs from India, Pakistan, Persia (Iran), Japan, Sumatra and Java. For example, a type of sword called cenangkas looks like a sword from India and another type, jenawi, is somewhat similar to the Japanese katana or Samurai sword.

Then there’s the sundang. It is the largest item in the keris family. Its design too can be elaborate as it is used for royal installation ceremonies.

Hunting and protection
The traditional weapons of the Orang Asli in the country have completely different decorative features. The designs are influenced by the environment. Among the Orang Asli’s arsenal are blowpipes, spears, the adze and trident. They are made using materials found in the environment.

These weapons are decorated with inks of different colours. The weapons are used for self-defence and hunting. For Sabah’s Murut and Bajau communities, their most favoured weapon is the machete, which is available in different sizes.

Decades ago, the machetes were used to kill. In the olden days, enemies were beheaded using the weapons. But, not anymore. For Sabah-born machete craftsman Jamawid Soh, modern Sabah machetes are these days made as souvenir items and for personal collections.

Jamawid makes hand-carved Bajau machetes for a living. Among the machetes from the Bajau community are the gaya and barong. 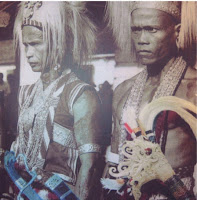 “The Bajau machete is different because the carving is not only on the sleeve but also on the blade,” says the 42-year-old. Jamawid learnt to make the machete from his father. He started making machetes when young. He takes about three days to make a machete. The Bajau machete features a significant motif, a replica of the head of a bird. Jamawid says this design is called the Sigai.

In Sarawak, one of the better known weapons is the ilang machete also known as mandau. Like in Sabah, this machete was used for self-defence. The head-hunters would decapitate their enemies with it.

According to Zainal, the ilang machete is synonymous with the Iban community. Other types of machetes in Sarawak are the nyabur machete (used by the Sea Dayak people), and spear, pipe and jepur (sword).

These three weapons are significant to the Bidayuh people. Traditional weapons in Sarawak are made beautiful by decorations and carvings. Like the keris, the hilt is carved. The sheaths are made of animal skin or wood.

Often, the motifs for these weapons are geometrical. Additional features of the weapons include shells, beads and animal teeth.
Posted by guro jeff davidson at 6:10 AM