And you shall be as gods: The culture of the anting-anting (Part 2)

The Philippine Online Chronicles
The arrival of the Spaniards in the Philippines in the 16th century proselytized the Filipino’s concept of God. To easily conquer the archipelago and introduce the Roman Catholic religion without antagonizing the superstitious and religious beliefs of the Filipinos, the Spanish friar missionaries presented the God of Roman Catholicism to be the same ancient Filipino God Bathala. The synthesis of the Roman Catholic religion and the pre-colonial religious and superstitious beliefs of the early Filipinos created a new kind of religion called Folk Catholicism, the religion of many millenarian groups in Southern Luzon, as well as the religion of anting-anting believers. 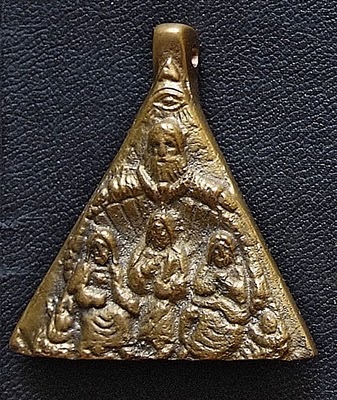 The Trespicio medallion of the Infinito Dios and the Tres Personas

The trinitarian dogma which is the most important of all Catholic doctrines gave way to the mythology that God, a spirit being, is an eye contained in a triangle. The triangle (or in anting-anting parlance, trespico), is the perfect representation of God, as it contained three equal sides or three equal corners, consistent with God’s three equal personalities. The triangular medallion, therefore, becomes one of the most popular of all the anting-anting. It symbolizes the oneness of the Infinito Dios and the Santissima Trinidad. Those who keep and faithfully believe in the trespico anting-anting can achieve oneness with the Infinito Dios and the Santissima Trinidad.

The Trespico medallion, believed by anting-anting faithful as an effective protector against evil because it contains the image and names of God. The symbols in this medallion include the Eye, representing the Infinito Dios, and the initials A.A.A which are the initials of the names of the Santissima Trinidad: Avetillo, Avetemit, Avelator (other names of the Santissima Trinidad are Aram, Ardam, Adradam). The ROMA is the initial of the title and name of God which means Rex Omnipotentem Macmamitam Adonay.

One of the Trespico Seals of the Revolutionary Government of General Emilio Agunaldo in 1899. 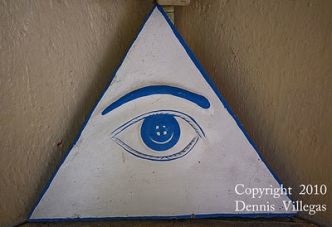 The Trespico as seen in the altar of the religious sect Tres Personas Solo Dios in Mount Banahaw by the author in 2010.

God’s Plan of Salvation
God’s plan for the world is to save it from the clutches of the Devil. For this reason, one of the Santissima Trinidad has been assigned to go down to earth to save humankind. Only through his sacrifice and death can humankind be saved. But since God is immortal and cannot die, he must assume a human form, and before he must be born a human, he should be conceived by a woman.

God being born as a human by a human mother is again one of those concepts that cannot easily be understood, especially among the early Filipinos who have a simple pre-colonial belief in the existence of God who is the first being in the universe. But for God to become human, and for God to be born by a woman, is something complex, especially if Catholicism teaches that the woman is the Mother of God, instead of just a blessed human person assigned by God to bear his human form.

Mary is truly “Mother of God” since she is the mother of the eternal Son of God made man, who is God himself.

The image of a Mother God therefore plays an important role in the theogony of the anting- anting. In Filipino society, the mother of the family is viewed as the “ilaw ng tahanan” who provides her children with proper care, upbringing and education. Moreover, the early Filipino society, although strongly patriarchal, viewed women as mediators to God. As proof, the early priests were women called babaylan.

The veneration of the Virgin Mary as the Mother of God is therefore consistent with the Filipino view of the important role played by the mother in Filipino family and society. The babaylan priesthood still exists at present in many folk Catholic religions in Southern Tagalog, most especially in the Ciudad Mistica de Dios and the Tres Personas Solo Dios in Mount Banahaw, where the religious leaders and priests are women.

The idea of a Mother God was accepted by the early Filipinos as a given. Thus the Virgin Mary eventually took her place as an important God in the pantheon of the Gods among Filipinos. Monotheistic though the Catholic religion is as claimed by the Vatican, to the simplistic views of the pre-colonial Filipinos, the Infinito Dios, the Santissima Trinidad, and now, the Virgin Mary constitute a polytheistic religion. 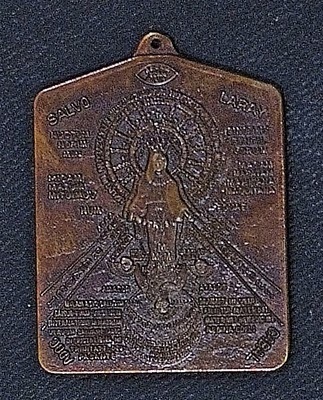 The medallion of the Infinita Dios. Author’s collection.

Thus the emergence of the myth of the Infinita Dios was established:

Before God created the universe, He decided to have someone help him in his task of creation. While thinking, five shining letters sprang forth from His mind that became the five petals of a beautiful flower (mayuming bulaklak). This flower is called the Gumamela Celis which means the Flower of Heaven or Flower of the Earth (Rosa Mundi). The five letters are none other than the beautiful name M-A-R-I-A, which in Syrian language is Miriam, which means the highest. The original name of Maria before God created the universe was Bulaklak.

Maria was thus the first being that emanated from God. In short, Maria was even first to appear than the 16 spirits, the seven Archangels, Luzbel (Lucifer), and the Santissima Trinidad. The Virgin Mary was thus elevated from her former status as bearer of God in the flesh, into a God that first sprang forth from the mind of God.

Then again, one should not be confused. The Infinito Dios, the Santissima Trinidad, and the Virgin Mary all share in the equality of their divinity. No one is more or less than the other. This is quite difficult to understand, so one can imagine how the early Filipinos had a hard time embracing this set of beliefs about God. Clearly, even a child can understand that there are five Gods being spoken here: the Infinito Dios, the Santissima Trinidad that is composed of three persons, and the Virgin Mary. 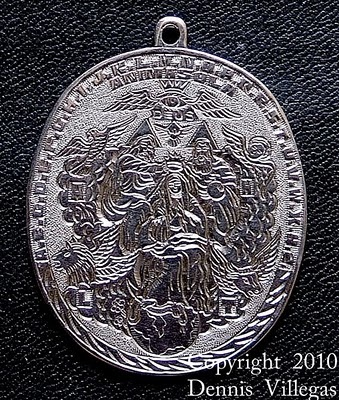 The medallion of the coronation of the Virgin Mary by the Santissima Trinidad. (Author’s collection)

However, to be consistent with the Catholic teaching that God is One even though there are clearly five of them sharing the One divinity, the early Filipinos simplified this complexity by inventing the God called Cinco Vocales: A-E-I-O-U.

A is Bathala/Infinito Dios
E is Mother God (Virgin Mary/Infinita Dios)
I is God the Father
O is Jesus Christ
U is the Holy Spirit.

The Cinco Vocales is the DAEIOUS AEIOU (daeious is pronounced as deus), the final enumeration of the pantheon of Filipino Gods as a result of the synthesis of the complex doctrine of the Roman Catholic religion and the simplistic pre-colonial religion of the Tagalogs. The Cinco Vocales, as all anting-anting faithfuls believe, is the highest God, because it is the complete composition of the five highest Gods. 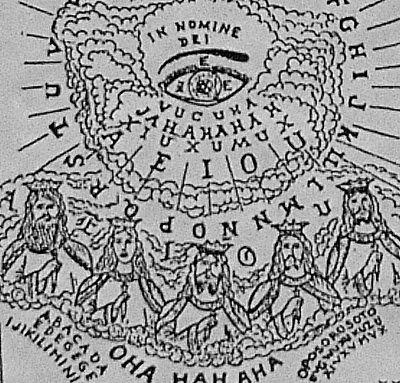 Consistorio ng Kadeusan ng Anting-anting
The pantheon of the Gods “DAEIOUS AEIOU” or Cinco Vocales. From left to right: InfinitoDios, Infinita Dios, God the Father, God the Son, God the Holy Spirit. This is believed by many folk Catholic millenarian sects and anting-anting believers as the true enumeration of the One True God, again consistent with the Catholic doctrine that there is only one God. 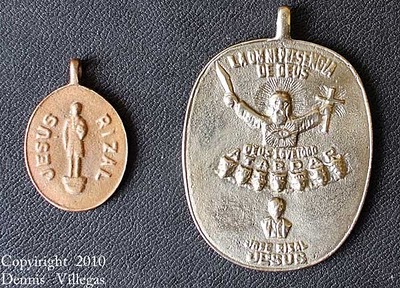 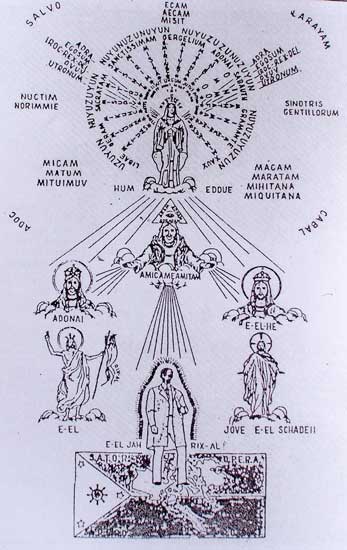 Seems all people have need to worship Mother! Thanks Guruji

Do you still carry your anting?? Does it still carry a spiritual power or is it now more a cool piece of history?

Thanks for the second half, great read.