A Rare and Mysterious Bugis System 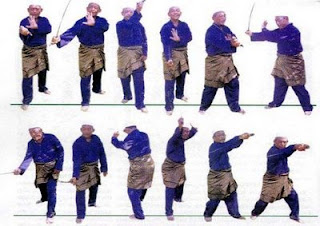 Pukulan Tujo Hari ("7-Day Hitting") is a well-known system from Malacca (West coast of Malaysia). Another is Pukulan Buah Malacca (the Fruit of Malacca Hitting). Both trace their roots back to the Bugis invasions of Malaysia. They are cousins of Silat Sendang. The Bugis-based Pukulan and Silat systems assume that you have a weapon hand and a shield hand, so they fight sideways to maximize the utility of their shield and to bring their weapon hand closer to their opponent.

This sideways profile also makes for very effective group and military tactics, since the Bugis warriors would line up on the battlefield or on their boats side-to-side. By standing sideways, you can have more warriors "per foot" if you will.

Pukulan Tujo Hari is an empty-handed and small weapon system based upon the Bugis methodology that is designed to be taught in 7 days (7 days X 8 hours = 56 hours). The system has four "modes" -

All of the weapons utilization and the empty-handed application are exactly the same. The key to the art is in their careful selection of targets that are fight-ending when struck properly (empty-handed or weapons).

Tujo Hari assumes the same sideways posture of its cousin Silat Sendang, but its emphasis is on bela diri (self defense) and not on being a complete system for war. They train so that no matter what is launched at them, they can respond with a single debilitating hit. They do teach a manner of flow and counter-for-counter, but only so they can deliver their one hit.

- written by Cikgu Omar Hakim
Posted by guro jeff davidson at 7:39 AM

guru,
thank you for the post.i read about this system before.
can we assume that this is a fast track course before a battle ?
is it taught to only to advanced students or beginning/intermediary students.

It most certainly IS a fast-track approach. I think it can be learned by students at any level with varying results. It is a training method more than a system.

Guro, is Pukulan Tujo Hari taught in the U.S.?

I can neither confirm nor deny that!

Wa'alaikumussalam. Have to right an article for that to explain. Maybe I'll ask my student & "son" Nadzrin for help with that. Not writing & teaching much about silat now. No silat student with true commitment and been so busy with teaching Islamic classes.

Wait a minute...Nadzrin is your "son"???? When did Nadzrin become your son? That's not fair! Why didn't you adopt ME????