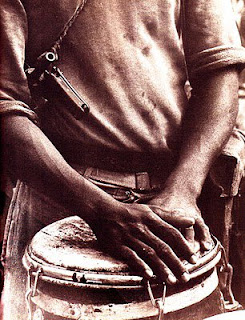 I ended up moving from the suburbs down to the barrio in Southwest Detroit.  By the time I could speak Spanish well enough I wasn’t considered so much of an outsider.  I was going to school during the day, training in Kali and Silat in the evenings, and spending as much time as I could with the man who became sort of a ‘sponsor’ to me.  I’ll call him Tata Palma here.  He owned a small candle and curios shop on West Vernor, and it was a very popular hang-out place in the local community.  He was one of my first friends in the neighborhood.  Over the years, I gave him so much money toward that damn candle store that I became a de-facto partner in the business!  He actually became my Padrino (Godfather).

Can you explain that?

He was originally from the district of Quiebra Hacha in Havana.   Apart from being a terrible businessman, Tata Palma was a Master in several Afro-Cuban religious expressions.  The foundation of his personal practice was Bantu-Kongo.  Now in Africa, lineages like that generally proceed along familial (typically matriarchal) lines.  In the days of slavery that all changed.  In the Cuban Diaspora, the Africans re-organized into social and mutual-aid societies generally called cabildos – which were organized not by family, but by nacion – such as Yoruba, Bantu-Kongo, or Efik (from Cameroon).  Within a particular cabildo you could have several spiritual lineages represented, and new ones were also formed.  The specific Bantu-Kongo ‘houses’ were known as munansos.  Interestingly, the matriarchal paradigm continued for the most part.  It’s usually the women that end up holding everything together.

Formal entry into a munanso requires an initiation.  The Elder that sponsors or conducts your initiation is considered your Godfather.  In 1991 I was formally accepted into Tata Palma’s munanso.

What is the purpose of the initiation?

Well, the best way to describe it…it’s like being accepted to a university.  You’ve met whatever qualifications are required and now you’ve been invited to study on a higher level.  That’s all.  How far you go now is up to you.  A lot of people don’t go very far past that point.  There’s a lot of hard work and study to be done.  If you don’t put the time and effort in, it’s like being accepted to college and then never going to any of the classes. As my old Karate instructor used to say about getting a Black Belt: it doesn’t mean you’ve mastered anything, it means we’re just beginning to take you seriously as a student.

Most importantly, if you do go for the advanced study, initiation gives you your fundamento – that’s your foundation which will follow you, allow you to build for the rest of your life.

Can you describe the initiation itself?

You have a new perspective of your past, as well as your future potential.  Your elders and community (ideally) help you to realize that as you progress.

to be continued...
Posted by guro jeff davidson at 8:34 AM