Behold the terrible scourge that has swept the ranks of FMA practitioners everywhere: 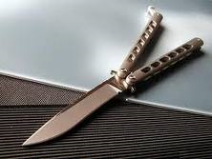 Up until the early 1980’s, this addictive pastime was all but unknown on our shores. Largely relegated to shadowy people practicing strange disciplines in near-secrecy. Suddenly, every ninja and bad guy in every cheap martial arts movie/tv show was wielding one. You couldn’t even open a martial arts magazine or equipment catalog without being bombarded by page after page of advertisements for the so-called “Butterfly Knife”, or “Ninja Knife”. Soon after, there were books, instructional videos, “collector’s editions” and the new, terrible fad was upon us like a storm.

It begins innocently enough. A student notices one of these implements of obsession placed quietly on a shelf or table in the training hall. Then, like a moth to the flame he’ll invariably say something to the effect of “You know, I’ve always wanted to learn how to use one of those!” and so it begins.

At first, they buy a cheap, crappy model at the local flea market. They bring it to their next lesson and the instructor (like a good dope pusher) will show some basic openings/catches. That’s usually enough to hook them. Next thing you know, they’re buy two and three at a time – in all price ranges. Then they’re accessorizing carrying cases. Then they’re asking for advice on “tightening the pivot pins” and throwing about terms such as “safety handle” and “Batangas Latch vs. Manila Latch”. Oh woe!

You can always tell by the band-aids. The typical addict in the early stages will have at least a few freshly stained band-aids about the palms and fingers. I’ve also learned to check the feet or shoes. Puncture wounds on the lower extremities (from dropping the knife) are common indicators. Eventually, the Balisong addict will develop a nervous, instinctive reflexive reaction of pulling up the foot quickly while manipulating his knife. One hapless addict whom we’ll call “John B” actually placed his stocking’d foot directly underneath a falling balisong, rather than having to deal with his wife’s anger over all the new holes in their freshly sanded hardwood living room floor (I mentioned that it strains relationships).

I’ve seen the best of friends become bitter rivals within weeks as each tries to one-up the other with his balisong flashery. The spirit of sharing and cooperation is all but destroyed: “Hey show me how you did that opening you just did!” “No way. Figure it out yourself.”

Next come…the videos. You receive youtube links via email at odd hours of the night, when normal, healthy people are surfing for smut. Then they text the links to your personal phone in the middle of the day. Imagine my horror as a teacher when one of my students, completely new to the martial arts, suddenly began to post his own balisong videos– showing skill with openings, closings and catches THAT I NEVER EVEN TAUGHT HIM! (evidence of infidelity of a heinous sort).

It can bring out the dark side of even the most upstanding individual. Years ago, a certain student whom we will anonymously refer to “Panday X” innocently gifted me with an old Balisong that his father – a veteran Law Enforcement officer – had previously taken off the street in an act of selfless service to the community. In good faith this Panday X said “I don’t really know anything about this knife Guro, so you please have it.” Only a matter of days later, this same gentleman, after observing me manipulate the balisong uttered the following oath “Gee, now that I see what it can do, I’m sorry I gave it away!” (Hell no I didn’t give it back to him either!)

WHAT YOU CAN DO

As with all addictions, it’s best not to even start. Instead of Kali, try martial arts like Jiujitsu or Karate. After all, when have ever seen someone completely obsessed with a bo staff or nunchaku? Or even traditional Kung-fu. A Shaolin Tiger Fork Trident is a great deal less portable than a balisong.

There is also evidence that the balisong can often function as a “gateway drug”, leading to complete obsession with even more exotic blades such as the Kerambit or Badik.

On the positive side, for the spouse, roommate, sibling, etc, of the balisong addict, selecting the perfect gift for Father’s Day, Christmas, and Birthdays just got a whole lot easier. Just realize that by going that route, you have in essence become an enabler.

Finally, the best way to fight this addictive menace is to remove it completely! If you yourself are suffering from Balisong Addiction, or if you are close to one who is, you must immediately gather all balisongs in the vicinity of the hapless abuser, package them neatly, and then contact me at once by private message.

I will gladly provide you with an address for shipping them. Then the nightmare can end.

Posted by guro jeff davidson at 11:32 AM

Tell tale signs of addiction..flipping keys in place of the balisong. Use of pen twirling and other flickable objects.

100% correct on the Balisong as the gateway drug to my obesssion with the karambit. It stared innocently enough with th ebalisong but being illegal I substituted that drug for the karambit.

My Name is Kuya Doug and I am a Balisong and karambit addict.

My name is 'Finding The Path' seemingly aka FTP and I am, Hmmm. I have both a question and a comment regarding this post yet I will be traveling over the holidays and I'd rather inquire back in the new..... Guro Jeff will I find you here in 2011?

Regards and Happy Holidays to you and your family

assalamu'alaikum! how are you my beloved brother? you will always be in my heart and dua!

Fancy meeting you here. Have you changed your name from Ustazshifu to Abu Husnain? What does it mean?

love to both of you, nadzrin and jd;
(Ustaz Saiful Muhammad)