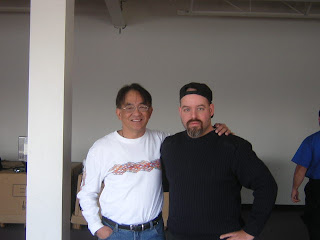 Some years later, in Michigan

That weekend was one of the most significant experiences of my martial arts career. We learned a lot of very important things from all of the great teachers there, and in a lot of ways it set the course that my students and I would follow for years to come – and are still following today.

The impression that the Batangas knife made on my mind was even deeper than the one it made on my arm. We stayed close to Tito Jun for the remainder of the weekend, taking in stories, philosophy, and perspective from his personal life. It was a window into a violent and frightening world. Whatever Tito may have lacked as far as “formal training” was more than made up for by his life experiences on the brutal streets of Lipa City, Batangas. I have met a few other individuals like him in various other places in the world. The truly dangerous ones are always quiet, soft-spoken, and low key. You’re not likely to notice them, and the price for ending up outside of their good graces can be heavy. That’s always the mold, as it were.

There was an obvious question on my mind, and while I did not quite have the (balls) to ask Tito directly, I tested the water with his son Jay – and was not encouraged “Well ka Jeff, Dad really doesn’t teach anyone outside of the family.” Another member of the Saskatchewan Kali group would later say to me “Oh yeah…Jay’s dad never teaches anybody anything. He just cuts us, and that’s about it.” That was less than promising.

On the evening before our trip back to Detroit, my students and I stopped to eat dinner at an Outback Steakhouse restaurant. As we destroyed three Blooming Onions, we made two solemn resolutions: First, we would no longer train in public. We had been holding weekly classes in the upper floor of the former Gold’s Gym in Dearborn, but we needed something more secluded. We decided that with enough time and materials, we could build a suitable, private facility much closer to home and away from prying eyes.

The second resolution would be far more difficult, if not impossible to achieve. We convinced ourselves – perhaps under a delusion of grandeur – that somehow…someway… Tito Jun himself would be the first guest instructor in our newly constructed school.

Well, time passed. In a matter of about 6 months, with the help of two foremen and one student in particular who really knew what he was doing – and with the blessing of Heaven – the students and I put the finishing touches on our new training hall. We (somewhat presumptuously) christened it BOTHOAN BATANGAS.

The other resolution took a lot more time and effort to come to pass. After nearly a year of constant communication and “negotiation”, and with the generous encouragement of my brother Jay, Tito Jun finally agreed to accept me as his student. If you ask me why he agreed in the end, I have to say that I don’t know. Maybe one day if he’s willing, Tito will tell us. It would seem to suggest that nothing is impossible if you go about it the right way, and the stars are favorable.

There were a number of conditions. For example, we could not practice in public (ok…got that one covered) Also, for the time being, instruction would be limited only to those students whom Tito had met in Rochester. Furthermore, in the near future Tito Jun would need to personally approve any potential student from our ranks who I was considering to learn his method. We complied.

Fate took its course. About a year after our initial meeting, the next Brotherhood of the Blade gathering took place in Detroit. The Saskatchewan contingent arrived a few days early, and our formal instruction began.

My friends, now you know how the story began, from the perspective of your humble narrator.

Really enjoyed these past few blogs Ka Jeff! Brings back some really great memories! Thanks for sharing ...