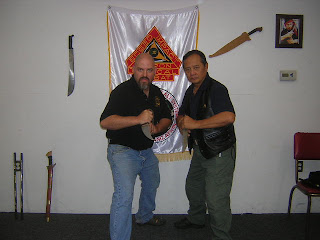 Tuhon Gaje and Me in Detroit


Looking a little closer at the difference(s) between the Batangas knife style of Manong Leon “Tito Jun” Saludo and the Kol De Mama Daga/Dagaso-Tirsia knife method from Grand Tuhon Gaje can give deeper insight into both methodologies for the practitioner.

The Pekiti-Tirsia system of Kali has been taught and practiced around the world for more than 30 years. It is in my opinion, one of the first bona-fide systems of Filipino Martial Arts – as opposed to a style. Through the genius of Grand Tuhon Leo T. Gaje Jr., a guy with no previous knowledge or training in weapons-based Arts can start from the very beginning and develop an incredible level of skill as he progresses methodically through the system. The drills and exercises are for the most part cross-transferable between knife, stick, and empty-hands.

Over the years, Pekiti-Tirsia knife techniques have been referenced, augmented, co-opted, pirated, and/or plagiarized by many practitioners from many other styles. In fact, if you study FMA (or even Silat) in the , and your training includes the knife – you can be very sure that there is at least some Pekiti-Tirsia there in 90% of the cases.

I began studying Pekiti-Tirsia in 1987 with a second-generation instructor in , and I learned the same knife techniques that almost everybody else that went through the ‘old school’ curriculum was exposed to. In 1999 when I began to study directly with Grand Tuhon Gaje, we didn’t do much that related to the old curriculum. We focused almost exclusively on the knife – to be specific, we focused on an entirely different approach to blade combat that Tuhon referred to variably as Kol De Mama Daga and Dagaso-Tirsia. Tuhon made it clear that this method could be considered as a “sub-system” within the framework of Pekiti-Tirsia, whereby a student could specialize in a particular weapon if deemed appropriate. I have to assume he deemed it appropriate in our case because it was almost all we studied for the next few years.

The training was much different – much more “alive” than the old school Pekiti knife material – so far beyond the standard “Knife-tapping” exercises. One afternoon we were sitting in Barnes and Nobel drinking coffee following a training session, and Tuhon said to me “You can spend 5 years just learning the knife and you will still not know everything!” In retrospect, I admit that I took that the wrong way. He wasn’t saying that there was so much material that it took 5 years to learn. I realize now that he meant that based on his ‘new’ curriculum, a capable student could devote a lot of time exploring and developing his own expression of the Knife Art.

Pekiti-Tirsia is a living Art. Like it’s Grandmaster, it is not frozen in some period or place in time, but is yet evolving and refining toward the higher levels. If you look at how the Art has developed over the decades, you might say that Tuhon Gaje was attempting to convey a particular “message” through his teachings.


Posted by guro jeff davidson at 8:20 AM

I remember we learned knife and empty hands with Tuhon for like three years before he did baston with us.

Do you guys train the hubud drill?

You obviously don't know us. I hate doing that drill and I hate watching people do that drill. So that would be a 'no'.