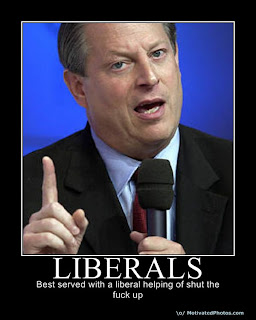 "Far from altruism, what actually motivates most of the progressive left is malignant narcissism. The lefty troll doesn't want to debate, he wants you to pay attention to him. And when lefty activists say, "We need to change the world," what they are actually saying is, "I want the world to notice me." Progressivism activism is a route to fame and public approval for star-wannabes who lack physical attractiveness, talent, or whatever it is that keeps getting Janeane Garofalo work."
Posted by guro jeff davidson at 1:42 PM

Y'know...a statement like this is about as accurate as saying that the righty troll is nothing more than a corporate noob whose main interest is making war to "further democracy", while in fact he's enriching his portfolio (after all, what's a little raping and pillaging between good Christians?). A man needs a hobby while he waits for the Rapture...

Blanket statements like these ensure that there can be no meaningful dialogue between parties who probably, if they could communicate efficiently, would find they have more goals in common than not.

You have a good point there. Thanks for commenting.

The Left has waged war against the Right (nee the establishment) for the past 50 years, and the only time they've ever wanted bipartisanship were during the instances that they were out of power.

Liberalism has ruined this country. Go down the list of things which the Left has started and/or continue to run:
-public education: fail
-social security: fail
-medicare and medicaid: fail
-welfare: fail

The Left has not only embraced, but gone further and legitimized people like Code Pink, Al Sharpton, Jesse Jackson, and Al Gore (who preaches against carbon while leaving a carbon footprint a thousand times the size of any normal person). Hypocrisy has taken a new definition in the Left Wing because it's barely recognized anymore.

The policies of the Lefts have ruined the family, ruined decency, and pushed the envelope in popular culture to the point that people like Lady Gaga and Marylin Manson are revered figures, 40% of babies are born to unwed mothers, and young girls aspire to be like Paris Hilton and Kim Kardashian. These things didn't happen overnight. And not once has the Left Wing ever compromised or given anything in return. Ever.

Bipartisanship is now nothing but code for submission and "meaningful dialogue" isn't even on the radar anymore. It's about time that the Right Wing starts to act like the Left has for so many decades.

Maybe "Sunbear" should leave the commune and come to Detroit aka New Mogadishu and see the splendors of the Most Liberal City in America?

@Forward Slash
Don't single out Detroit as a Liberal failure. Why not include:

and the whole entire State of Michigan under Granholm