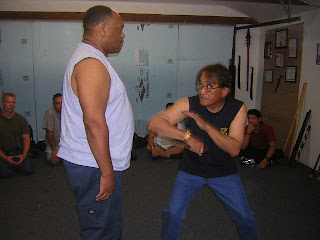 Death Be Not Proud...(or Fancy)

At our training hall, this year has seen another cycle of observation, selection, and initiation into the Batangueno-style knife/gun combatives for a select group of new(er) students. As we prepare for our next long-awaited training session with Tito Jun in a few months, here is an article that conveys some of the "historical perspective". - JD

SAY the word barako and immediately three meanings come to mind: the strong-flavored and robust brew of the liberica coffee; the sex-driven adult male boar ready for breeding; and that certain brand of Batangueño, the rough and tough Filipino male from the province of Batangas. All three possess virility, strength, fearlessness — yes, even the coffee, whose flavor practically leaps up from the cup and straight onto one's tongue. All three carry within the pride of the Batangueños, who claim these qualities exclusively as their own.

It is the human barako, however, who is obviously the most fascinating, because he is at once simple and complex. In a province known to produce the export-quality balisong (fan knife), where every Batangueño is expected to be armed and efficient in the uses of the weapon made only in Batangas, the barako prefers the gun to protect himself and his loved ones.

In the old days, before the permit to carry guns was heavily enforced, the barako would never leave home without his .45 sticking out of the waistband of his pants, pulling his karsonsilyo or undershorts down. He must be prepared, even with his undershorts down, to fight back if someone throws a challenge, a balisong, or even a bullet (through a gun barrel of course) at him. This also means that he should be a good shot, a sharp shooter if necessary, because to stay alive and keep his image as a barako or strongman, he would need to keep shooting until his enemy falls or runs away. A true barako also fights his enemy (or enemies) in the open, and face to face.

In the book Batangas Forged in Fire, which features the province's most prominent families, among other things, a blueblood, Teodoro Kalaw (husband of former senator Eva Estrada-Kalaw) is photographed standing straight in the barako pose, ready to fire the revolver on his right hand, even as he totes his coat on his left arm. Such was the way of the elite barako: classy, but still deadly.

Barakos are also found in the pages of the nation's history, such as the known man of action, Gen. Miguel Malvar, the last military leader to surrender to the Americans. Even a Batangueno who couldn't walk showed kabarakuhan (bravery) in his own way. Although disabled by poliomyelitis, Apolinario Mabini was a man of thought who rose to supremacy as the brains behind the revolution and the first Philippine Republic.

Yet despite the show of virility and the stance of masculinity, the feared strongman known for his kills will often soften or tone down when faced with the woman who captured his heart. A barako is not rude toward the woman he loves. He is in fact gentle toward her and will do everything in his power to make his special woman feel important, even if it means carrying her books or pink, flowery handbag in public and ignoring the hoots of hecklers in the streets, although he is sure to confront them later when she is not around.

The barako is also loyal to his family. Although conflicts may arise between barako brothers and fathers, they all unite and fight for each other when trouble from outside forces threaten their family's pride, honor, and existence. In many instances, the barako will ignore tempting offers of dubious fortune in order to make sure his family's name remains untarnished. Indeed, the real barako would rather be poor than live with shame, just as he would rather die fighting than live in fear.

And fight the barakos did during World War II, ambushing and killing many Japanese soldiers. In retaliation, the Japanese massacred the city's population, taking the lives of 18,000 of its 25,000 residents. Lipa City was also razed to the ground, with only five houses out of hundreds of old mansions left standing afterward.

It was probably a sight that could have made anyone cry, but most probably not a barako, who is the sort of male who believes he is never ever supposed to shed a single tear, even during the wake of his own father, even in the face of their own death. The tears from the known strongmen, therefore, could mean only two things: One is that they are crocodile tears, designed to invoke pity. The other is that they belong to a fake barako.

Barakos can be bullheaded. After the peacetime elections of 1949, a group of barakos from wealthy families took to hills at the defeat of their presidential bet, Jose P. Laurel, whom they believed was cheated. Backed by formidable gun power, they were ready to fight the government head on. Only the messengers sent by their fellow blueblood barakos who wanted peace were able to stop the planned bloodbath.

Some towns and cities in the province have more barakos than the others. Among them is the town of San Juan, in the easternmost part of Batangas, that also known for its coconut wine or lambanog.

Batangas City also once had a prominent barako, who by his skill and probably, by luck, was able to live long enough to run for public office and win. This barako made sure the city enjoyed peace and order. When he died, Batangueños praised him for his leadership. Now it is his nephew who sits behind his former desk.

Youngsters who aspire to be barakos or want political clout someday are known as barakitos. These young ones are often seen with the barakos, who take them under their wing as alagang barako (novice barakos). Already quite rowdy, barakitos oftentimes get bolder during election season.

At present, however, Batangueños themselves believe there are only a few barakos left walking the streets of the province. The decrease in the barako population could probably be due to the fact that in their obsession to be supremo de barakos, most of them have killed each other (matira ang matibay or only the bravest remains standing); in worst cases, the killing could have included members of each other's family (ubusan ng lahi). Many barakos, after all, have failed to realize the difference between pride and foolishness. — Mei Magsino
Posted by guro jeff davidson at 8:09 PM

we are also teaching balisong lesson in padre garcia and rosario