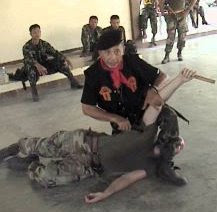 There is probably only one person that can claim to have the true, authoritative history of Pekiti-Tirsia - and that is the Man pictured above. The following account is as detailed as I've come across - so here it is. I chose a picture of Tuhon for this post because more than any symbol, or logo, or written word...he is the Art!

The Pekiti-Tirsia Kali system is one of the few remaining authentic and complete Filipino combat systems in existence today. Pekiti-Tirsia is system and technology of combat fighting with the Blade. It encompasses all traditional weapon categories and is formulated on the strategic principle of the Triangle. The triangle serves as the basis for footwork, striking, and the tactical principles of close quarters combat.

The Pekiti-Tirsia system of Kali originates from the provinces of Panay and Negros Occidental in the Philippines and was formulated and perfected by the Tortal family. The family patriarch and Grandmaster of Pekiti-Tirsia, Grand Tuhon Conrado B. Tortal, passed this system and its attributes onto his only grandson, the sole heir and its present guardian, Grand Tuhon Leo Tortal Gaje, Jr.

Pekiti-Tirsia is a traditional family system of Filipino martial art that traces its existence back to a time and era when carry and use of the bladed weapon was common and required among most men. Oral history of the Tortal family testifies to four generations practicing the family system of Pekiti-Tirsia. Norberto Tortal taught the system to his son Segundino Tortal. Segundino taught his five sons; Balbino, Tedoricio, Francisco, Quirino, and Conrado. Of the five brothers, Conrado was chosen as inheritor of the system with Balbino as one of his principal training partners.

Balbino was later shot and killed by Japanese soldiers in the area of Barangay Conception, Talisay, Negros Occidental, in 1945 after disarming a Japanese officer of his samurai sword and killing two soldiers who attempted to bayonet him.

These generations of Tortal family leaders utilized the laboratory method of research and testing of combat Bladefighting tactics and techniques. Through friendly instructional exchanges, sparring duels with other recognized family and system leaders, and direct combat resulting in the death of the enemy, the system of Pekiti-Tirsia was continually trained, executed, and validated.

Grandtuhon Conrado B. Tortal or Tay Dadoy as he was popularly known, was a highly respected man in the western Visayas and northern Mindanao regions of the Philippine Islands. Born in 1897 in Tigbawan, province of Iloilo, Panay, the Tortal later emigrated to Negros Occidental where they owned and cultivated several agricultural properties.

As was common for the time, Tay Dadoy was fluent in English, Spanish, and his native dialect Illongo, as well as Cebuano and other regional dialects of northern Mindanao where he travelled for commerce and as a Christian Missionary. Grand Tuhon Tortal later served as the first Chief of Police of Victorias, home of the largest Sugar Central (Mill) in Negros Occidental with a reputation as a strict disciplinarian yet compassionate mediator.

Tay Dadoy expertise in the Filipino Fighting Arts was well known and recognized through several encounters such as his public defeat of two of the Lizares brothers, a prominent political ruling family from Talisay, Negros Occidental, in 1928. After attempting to take control of a Tortal property, Conrado, with hardwood Espada y Daga engaged both the Lizares brothers armed with Bolo and disarmed them by direct strikes to the hand and body yet spared their lives. In 1933 Conrado Tortal defeated Tansiong Padilla, authority for the Aldobon style from Panay, in a highly publicized duel arranged by the mayor of Bago, Negros Occidental.

In 1938 in Legaspi, Albay, Grand Tuhon Leo Tortal Gaje was born to Feliza G. Tortal (the daughter and only child of Conrado Tortal) and Leopoldo P. Gaje, Sr. Shortly after his birth and the subsequent death of his twin sister and his mother Feliza, Leo was taken into custody and raised by his grandfather Conrado. From the age of six years old Leo was trained in the system of Pekiti-Tirsia. From the ages six to nine he was trained exclusively in footwork. Daily he was placed on top a wooden table with Conrado striking at his feet as he mastered the strategic maneuvering patterns that remain one of the signatures of the Pekiti-Tirsia system. Leo was then trained in the Doce Methodos, Contradas, and other advanced combat methods twice a day beginning in the mornings before school and continuing late into the evening throughout his secondary, high school, and college studies.

At the passing of Tay Dadoy, Leo Tortal Gaje, Jr. inherited the treasure and legacy of Pekiti-Tirsia. At this time, family combat systems in the Philippines were closed to only those that shared genetic history and chosen for their discipline to keep and protect the family secrets. For the next decade Tuhon Gaje kept this promise and soon entered business where he served as President of the Confederation of Free Trade Workers Union and Executive Vice-President of the Bataan Free Trade Zone Industrial Development Corporation. Here he trained his own Security Forces for the escort of cash funds, trained Bodyguards and Protective Teams for local and provincial politicians, and, in his own words wrecking crew of confidants that provided his personal security.

In 1972, Tuhon Gaje emigrated to the United States of America and settled in New York City. Upon seeing the popularity of the martial arts sweeping America at the time, he envisioned the success of Filipino martial arts and recognition of the cultural and martial achievements of the Filipino people through the superiority of its combat systems. In keeping with the philosophy of the Pekiti-Tirsia system and its belief in Life, Health, and Success, Tuhon Gaje opened the door of knowledge to a select few of advanced Black Belt students and embarked to offer to the world, those that persevere, the mastery process of Kali.

Continuing now into a fourth decade, Grand Tuhon Leo T. Gaje has been the leader in promoting and teaching authentic Filipino Fighting Art around the globe not solely in the martial arts field but throughout the Military and Law Enforcement professions as well. During this time he has joined together with other Filipino Grandmasters in this endeavor and until this day works with the highest levels of the Philippine government in the promotion, recognition, and preservation of the cultural legacy of Filipino Martial Arts.

Grand Tuhon Gaje was the leading Filipino Martial Arts authority in the 1970 in the eastern region of the United States at the same time Guro Dan Inosanto and other Filipino Grandmasters were doing the same in the western region (New York and California being home of the largest Filipino communities in the US). Since the introduction of Filipino Martial Arts to the US and across the globe Pekiti-Tirsia has hallmarked many first in this history.


Grand Tuhon Gaje was the first to organize and conduct large-scale promotions and demonstrations of Filipino martial arts in the eastern US in such venues as New York Lincoln Center and displayed the first ever public demonstration of full-contact Filipino stickfighting at the Great Gorge, New Jersey Playboy Club.

Grand Tuhon Gaje was the first to open a Filipino Martial Arts school at the Philippine Consulate in New York City and first to promote Filipino martial arts among other martial discipline national organizations. Grand Tuhon Gaje joined with other recognized leaders such as Alex Sternberg of the Jewish Karate Federation and Grandmaster Robert Trias of the United States Karate Association conducting training programs for senior Black Belt students and joint public demonstrations. Grand Tuhon Gaje was recognized as style head of the Filipino martial arts for the United States Karate Association (USKA) by Grandmaster Trias and was inducted into the Indonesian Pendekar Banting, association of Indonesian Silat Pendekars.

In 1979 Grand Tuhon Gaje was a principal organizer, with other Grandmasters, of the First National Arnis (Kali) Tournament in the Philippines sponsored by NARAPHIL (National Arnis Association of the Philippines). Tom Bisio, a student of Grand Tuhon Gaje for 3 and 1/2 years, won as Grand Champion of the Instructor division against a field of senior instructor competitors. In 1980 Grand Tuhon Gaje was appointed NARAPHIL Commissioner for North and South America and promoted the Filipino Martial Arts extensively throughout these continents. Throughout the 80s the first generation of Pekiti-Tirsia students and instructors dominated the full-contact stickfighting tournament scene across the US defining their reputation with speed, power, and footwork.

Grand Tuhon Gaje was the first to introduce the Filipino martial arts to the New York Police Department (NYPD) and conduct department endorsed training programs. This program led to Grand Tuhon Gaje development of the Safety Baton and Edged Weapon Awareness/Strategic Knife Defense programs the FIRST Defensive Tactics system based on safety and liability reduction at a time when the accepted methods targeted the vital areas of the body resulting in substantial liability to police officers and departments. Grand Tuhon Gaje was later appointed National Training Director for the Justice System Training Association and the U.S. Police Defensive Tactics Association leading to his position as Technical Advisor and appearance in the Calibre Press video SURVIVING EDGED WEAPONS in 1988. This highly acclaimed video substantiated the threat of edged weapons to the law enforcement community and established Grand Tuhon Gaje as the leading authority on edged weapons defensive tactics.

Throughout the 1990 until today, Grand Tuhon Gaje has been the leading propagator of authentic Filipino Martial Arts based on the use of the Blade, in the Republic of the Philippines. Through hundreds of radio, print, TV, demonstrations, festivals, tournaments, and training programs conducted at the local, provincial, and national level, Grand Tuhon Gaje has been the leading voice for the education and recognition of Kali and the indigenous Filipino Martial Art systems. Throughout this time he has been endorsed and recognized at every level of the Philippines government including recently as recipient of an Exemplary Achievement Award from the Office of the President Gloria Macapagal-Arroyo, for worldwide promotion of Pekiti-Tirsia Kali and the Filipino Martial Arts.

Today in the Philippines, Grand Tuhon Gaje system of Pekiti-Tirsia is the ONLY Filipino Martial Art system recognized as official warfighting doctrine by the Armed Forces of the Philippines. The Military Edged-Impact Weapon System of Pekiti-Tirsia is the official close-quarters combat system of the Force Reconnaissance Battalion, Philippine Marine Corps (PMC) and is part of the official PMC Schools command being taught at Enlisted Basic Training and the Officer Basic Course. The success of this program has spurned training requests from all other branch services of the AFP and the Philippine National Police (PNP). Today, the Filipino Fighting man is now recognized as a world leader in close-quarter combat skills. Since the program inception in 1998, the Philippine Force Recon Marines have trained US special operations forces and other combat arms units up to battalion level in Close-Quarters-Combat demonstrating the superiority of the Filipino martial technology as acknowledged by the US unit trainers and commanding officers. Presently, Grand Tuhon serves as a Senior Advisor to the Armed Forces of the Philippines and the Philippine National Police conducting advanced training programs for operational units engaged in the Global War on Terrorism.
Posted by guro jeff davidson at 11:52 AM