Pekiti-Tirsia Michigan Q and A 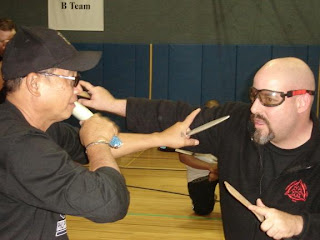 I’m far too busy [lazy] to write something new for this blog so I will post some of my responses to an interview of sorts that took place via email:

What has your training been like in Michigan with Grand Tuhon Gaje?

I believe it was in 2001 that we started bringing Tuhon Gaje here. From 2001 to about 2005 we would bring him in 2-3 times per year, as his schedule permitted. Typically he would give a weekend group seminar, and generally stay at my house for up to 2 weeks. I learned so much in those days. The best training happens at odd hours and strange places. Seminars are good for what I would call a part-time student. If you are really serious however, get as much one-on-one time as you can handle. You will treasure it forever.

There was a guy I remember from the 2001 seminar who came in from out of state. As I recall he had studied Pekiti with a 3d or 4th generation instructor and this was his first time meeting Grandmaster Gaje. During a break, he said to me “I’ve been doing these techniques for 15 years and I’m just now seeing how it’s supposed to be done.

The thing about Tuhon Gaje and seminars is that if there are people present that he has no history with, he can be somewhat reserved about what he shows. That’s one of the reasons we eventually decided not to open his seminars here to the general public. My senior students decided that they were willing to make the extra financial sacrifice in order to keep the seminars strictly in-house. In fact, as far as public relations go my students are complete failures. A few years ago we used to share space with a branch of the Kronx Gym, but in 2004 the students decided to build a training hall so that we wouldn’t be working out in public. At the end of the day, it all paid off in spades. Now when we have seminars, instead of trying to figure out who’s who, we pick right up from the last one.

How is he as far as critiquing?

As much as Tuhon Gaje tears you down physically, he also encourages you. He’ll pat you on the back and say “You are the best!” Now with that, you can take it the wrong way...you can walk away saying to yourself ‘Wow, Tuhon says I’m the best’ and let it go to your head as you go off the deep end. I’ve seen that happen many times. Or, you can take it with a grain of salt and stay humble and keep learning.

So you never allowed his compliments to go to your head?

Actually, in my case, he pretty much said “You know, you’re not that good now but you have potential.”

So how did you set about to develop that potential?

Pekiti-Tirsia is a big pond. There are a lot of sub-groups and not everyone is on the same page. I had the great fortune to establish ties with Jay Saludo in Canada and Doug Marcaida in New York. The three of us have always shared common goals as far as development, and we corresponded for months before we all met for the first time - sharing and testing ideas. Not only is Kuya Doug a flawless practitioner, but he lives by what Tuhon Gaje calls the Thought Provoking Process. Without the TPP, the Art can become dogmatic and cease to be functional. Kuya Doug is fully functional in every aspect of weapons and empty hands. He’s always testing, always researching.

Later when I went to Texas to train with Guro Omar Hakim and I met Ricky Rillera and Robert Slomkowski - that gave me an additional perspective. Those guys are all about footwork, timing, and explosion. They do drills in the same spirit that professional athletes prepare for their events...the drill is NOT the fight...the FIGHT is the fight! Any coach will tell you that its all about form. Even an untrained person can see that the guys in Texas are absolutely brutal, but until you train with them you don’t realize how concerned they are with form as well.


Do you incorporate Silat Kuntau Tekpi into your Pekiti-Tirsia practice?

The short answer is yes, but you have to view Silat in its proper context. Just like Kali, there are styles and there are systems, and they can vary greatly from one to the next. Generally speaking on the physical level, you can blend silat techniques with other martial arts pretty smoothly if you know what you’re doing. On a philosophical level, what I have been taught in terms of the combat rationale of Silat is very different from Pekiti-Tirsia. I believe Silat is a cultural/religious expression first and foremost. In my experience very few Indonesian and Malaysian pesilat consider themselves “martial artists” the way people here think of themselves. Silat is a component of their way of life - it’s not the Way itself. This context is missing in Silat in the United States.

So is it cultural or religious?

Both. Traditionally, Silat informs the way you relate to your religion and your community. I don’t know if we need to import all of the cultural decorum associated with Silat in Malay lands, but it would be nice if we could use the traditional model to create something of that here. That’s what I’m trying to do with my students.

It makes for better students?

It makes for better human beings.
Posted by guro jeff davidson at 8:39 AM

Physically, Silat must function as joints in harmonizing attained martial art knowledge and skills. The simplicity in Silat must compliment any martial knowledge whether it is simple or complicated art. This must be done with adab (manners) and guidance. Deeper understanding must be attained before exploring this exceptional side of Silat.

Silat is supposed to be a self physical and spiritual journey of offense and defense. As Muslim, one must always understand that Islam will always be the core of Silat. In fact, as Muslim, Islam is the core of life. This will be among the reason why Silat has such adaptability and flexibility in adjusting itself into any physical and spiritual way of different understanding. It is influenced by the universality of Islam teaching.

Cultural part of Silat is also important in touching the essence of society, specifically the Malay tradition. This cultural side also has a very high adaptability and flexibility towards other norm of culture. Physically and spiritually, Silat is actually an art of control and adjustability. Silat teach, provoke and guide oneself to be highly alarmed and able to protect oneself physically and spiritually. To learn, master and feel Silat, one must understand and love Silat as whole.

In a simple word, you are right my dear brother JD. :)