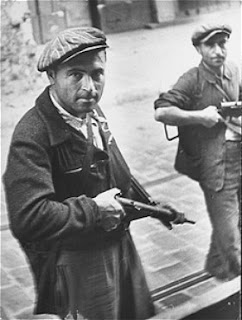 WARSAW (AFP) - The last commander of the 1943 Warsaw ghetto uprising, Marek Edelman, on Saturday honoured the memory of his comrades who died fighting Nazi Germany in the doomed Jewish stand against the Holocaust.

Joined by family members, hundreds of bystanders and city officials, Edelman marked the 65th anniversary of the revolt at the imposing monument to the ghetto fighters, unveiled in 1948.

The frail Edelman, 85, was then pushed in his wheelchair to the site of the bunker where the leader of the revolt, 24-year-old Mordechaj Anielewicz, and 80 comrades had committed suicide as Nazi forces closed in.

The crowd then walked to the site of the "Umschlagplatz", the railway siding from which the Nazis sent more than 300,000 Jews to the Treblinka death camp in northeastern Poland.

Edelman, who took command after Anielewicz's death, rarely attends high-profile official ceremonies, preferring to remember his comrades in a lower-key fashion on April 19, the day the revolt actually began.

This year's official event was held on Tuesday, in the presence of Poland's President Lech Kaczynski and Israel's Shimon Peres.

That ceremony had been brought forward because the actual anniversary fell on a Saturday, which is the Jewish Sabbath.

On the eve of World War II, Poland was Europe's Jewish heartland.

After invading Poland in 1939, Nazi Germany set up ghettos nationwide to isolate the country's Jews and facilitate the "Final Solution" -- half of the six million Jews who died in the Holocaust were Polish.

At its height, more than 450,000 were crammed into the walled Warsaw ghetto.

About 100,000 died inside from starvation, disease and in summary executions. Most of the rest were sent to Treblinka in mass deportations which began in 1942.

In the ghetto, a handful of Jewish paramilitary groups, mostly made up of young people -- Edelman was just 20 -- coalesced into a poorly-armed force of around 1,000.

The banner of one group was a blue Star of David on a white background, which caused Nazi ire when it was hoisted during the revolt. It became the flag of Israel.

On Saturday, youths handed out paper armbands emblazoned with the symbol, which participants wore as they formed a human chain around the monument while sirens wailed and a Polish army honour guard fired a salute.

The ghetto fighters first clashed with the Nazis on January 18-22, 1943, managing to hinder the deportations.

"We knew perfectly well that there was no way we could win," Edelman told AFP in a recent interview.

"It was a symbol of the fight for freedom. A symbol of standing up to Nazism, and of not giving in," he said.

The fighters held out as 3,000 Nazi troops razed the ghetto with explosives and fire.

Following Anielewicz's suicide on May 8, Edelman and several dozen comrades escaped through the sewers. The Nazis marked their "victory over the Jews" by blowing up Warsaw's main synagogue on May 16.

Besides denting the Nazis' sense of superiority, the fighters managed to inflict some damage, killing and injuring a combined 300 troops.

Sporadic clashes continued in the ghetto ruin until the autumn.

Edelman and many other survivors later took part in the Warsaw uprising, launched on August 1, 1944 by the Polish underground.

That failed 63-day revolt and the Germans' brutal response cost the lives of 200,000 civilians and 18,000 resistance members, and saw the near-total destruction of Warsaw by the Nazis.

Heroes to be remembered- every bit as gallant as the men who stormed Normandy.

Thanks for reminding us of this.