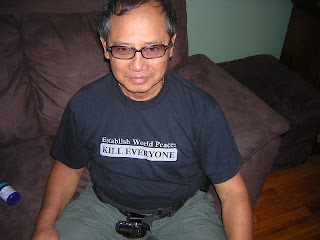 Tuhon Gaje at the Detroit Headquarters

If you felt the Earth shake in Michigan over the past 5 days, it was because the greatest Pekiti Tirsia seminar in the history of the World took place here (and is still going on). We have just returned from our Higgins Lake training camp, and Grand Tuhon Gaje has announced that we will be having class again in a few hours.

So my friends, when all is said and done, you will have the complete story with pictures. For now, I leave you with this posting that The Master himself added to an FMA forum:

Pekiti-Tirsia Pitbull Brotherhood of the Blade

The special declaration of the celebration was highlighted in the bon fire ceremony held in the night of August 12, 2007 where the awards were presented and the demos on ginunting, knives, sticks and open hand entertained everyone.

The strength of the Brotherhood was extended to new members and an increasing number of PTK student added to the main Brotherhood will cover the major cities in the US.

Posted by guro jeff davidson at 11:44 AM