(Not) Coming Soon to a Bookstore Near You 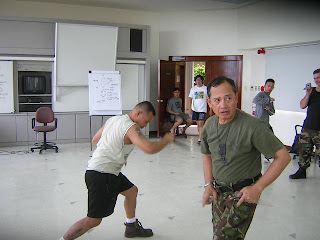 I was was asked many times " Tuhon you [should write] a book on Pekiti-Tirsia so we can have it" Some one asked Tuhon do you have the book now when do you write your book. Politely I responded, I am the book if you want to read , you study with me and I will make you a book.

The FMA was not written in a piece of paper for people to learn. The early forefathers were so conservative that they don't want to be seen, performing or swinging the stick or bolo. I remembered my Grandfather's training policy , for deeper and advanced techniques he waits for the full moon so he can train me in the middle of the night. I always asked him , why on moonlight night. He said two things important on moonlight night. When the moon gives his light to earth at night it drove all the evil spirits and for our training nobody will see what we do because they are afraid to be out during moonlight night.

Since the FMA was and is a Sacred art, the methods taught were and are not meant to teach for money or for other people to learn other than the very close member of the family. Those early days were as cruel as living in a place where people are killed every day anytime of the day . The Spanish influence of cruelty was still a paranoia for all the families living in a small town or barrios. Anything that they may have were always kept in a place so secret that in spite of sudden robbery or force entry as what the Spanish soldiers were doing they were prepared for it.The fighting system , the original kali was one of the treasures that the early families kept and treasured. This traditions is still fresh among the people in the hinterlands in Negros and in Panay and some provinces of Mindanao and Masbate.

The reason is simple. Every style or system had their own secret of fighting if that secret is known then the family is in danger because they had nothing to protect themselves in case of sudden attack because the secret was exposed to the enemy>

All those years that I was under my Grandffathers wing I had not heard him say you write what I taught you nor he said get a pen for you to write important techniques. It was a direct straight to the eye training discipline that youre only choice is to retained what you see and what you feel. Thiis is as true to the 300 Spartans or to the Pirates of the Carribeans or to the Gladiators and most of all the Katipuneros of the Philippine revolution.

Do you need the book ? or the book needs you to be you.

The pen is the ginunting, the book is the body of your enemy (emphasis mine - jd). You are taught to write the word . Peace on Earth and good will to men.

Where is the book? The BOOK IS YOU. JOIN THE CLUB OF THE BOOKLESS
Posted by guro jeff davidson at 3:19 PM

I think he really gets sick of people asking him if he's going to write a book.

and studying with the living PTK book is far better than just reading a book.

when you finish the book, that's it whereas if you (think) are done training with Tuhon, he could still be able to teach you more than what he has already taught.