Honor of Honors - Batangas in Michigan 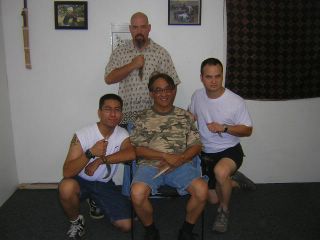 I am still working on the photostory from our most recent seminar with Supreme Grand Tuhon Gaje. God Willing, this will be posted on the Maphilindo website within the next week or so. But I would like to share one part of that amazing week here on this humble blog right now.

In my years in the martial arts, I have been blessed to cross paths with some truly great teachers and practitioners. In the Silat world, Guru Hassan Ali (Brandt Smith) of KSMA; Pendekar Agus Hiriyadi of Setia Hati Terate; Pendekar Gus Fud of Perguruan Macan Putih; Guru Gorka Echarri of Cimande; Saiful Azraq of Silat Cekak Hanafi; and Ustaz Hussein Udom of Silat Mubai have each gifted me in their own way and I am honored to count them as Brothers.

In the Pekiti Tirsia world, Guro Omar Hakim; Kuya Doug Marcaida; Ricky Rillera; Robert and Steve Slomkowski - all of whom I have had the honor of training with and Guro Jun DeLeon of Kali DeLeon for even the precious little he has shared with me over the years when we have been together at seminars.

And of course our leader, Supreme Grand Tuhon Leo T. Gaje Jr. whose mantle of Pekiti Tirsia we carry with pride and honor - is the one responsible for putting my feet firmly on the Path!

Perhaps our closest friends in the martial arts community - and life - are the Pekiti Tirsia clan from Saskatchewan, Canada headed by the furiously talented Ka Jay Saludo. Ka Jay and his students are our Blood Brothers in Pekiti, and together with Kuya Doug Marcaida make up the "Tri-V of Power" (Detroit, Rochester, NY & Saskatchewan) dedicated to the refinement and progression of Pekiti Tirsia and Filipino Culture.

The quiet patriarch of the Sask' Pitbulls is Manong Leon Saludo, of Lipa City, Batangas. In October of 2003, in Rochester, New York Manong Leon gave me a brief and utterly terrifyng demonstration of the knife-fighting style developed in his province of Batangas. This system has been born, bred, and honed through countless knife fighting encounters in the home town of the infamous Balisong. I will not divulge the "proper name" of this style right now for my own reasons, but it is sometimes known colloquially as VIENTENUEVE. After this personal demonstration in New York, my main priority with regards to this system was to learn how to not get killed by it. As I have said in previous posts, it is probably the most dangerous knife system I have seen. I don't care who you are and what your training may be...unless you are Tuhon Gaje...if you are ever misfortunate enough to face a knife-wielding Batangueno, you are going to be rendered a horrible bloody mess in a very short period of time, and you are going to the Other World in shreds. Trust me.

There are less than a handful of Masters of this style alive currently - Manong Leon is one of them. It is very rarely taught today in Batangas, and it has NEVER been taught in the United States...

On Thursday, August 26th, 2005 I had the honor of being formally accepted into the venerable lineage of the Vientenueve Style by Manong Leon himself at our training hall here in Detroit. I was awarded the title of "Dalubhasa" and am the third person outside of Batangas to have been taught by Manong Leon. The other two capable practitioners, much senior to myself, are Jay Slaudo, and Eddie Panamaroff. They along with Master Leon Saludo taught a select group of my students prior to Tuhon's seminar here last month. Although our instruction actually began in April of this year, it was during this most recent training experience that the true foundation of the Vientenueve style was passed to us.

I consider this one of the highest Honors I have ever received in over 20 years of martial arts.

Just as the Batangueno fighter carries two knives, so it is with us. We carry the Knife of Pekiti Tirsia firmly in one hand; and now hold the Knife of Batangas in the other hand. Although these two systems are different in theory and application, the common bond between them is our Love and Respect for the people and for the culture that brought them both into being - in the magnificent Land of the Philippines.
Posted by guro jeff davidson at 7:03 PM

I saw your group's performance at the Philippine American Cultural Community Center in Southfield last month. I was very impressed to say the least especially with the young lady who did the knife disarming. I hope to be present the next time Grandmaster Gaje is in Detroit.

Thanks Carlos. Feel free to come and train with us anytime.

Glad you enjoyed the demo.