A Feather in Our Cap 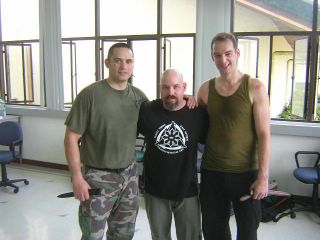 
Grand Tuhon Gaje has just returned from a furious schedule of seminars and workshops in Europe conducted over the past month. The coordinator/director of Pekiti Tirsia in Europe is Maginoo Mandala Uli Weidle of Germany - whom I had the pleasure of training with during the Balikatan of 2005 in the Philippines.

In addition to running perhaps the largest Pekiti Tirsia school in the world, Ka Uli promotes the Art all over Europe. Currently there are Pekiti Tirsia schools in Germany, Spain, Sweden, the Czech Republic, Austria and Finland - and soon Romania. Ka Uli is also a tactical instructor for the elite German and Austrian SWAT/Counter-Terrorism forces.

There can be no better endorsement of the effectiveness of Pekiti Tirsia and Grand Tuhon Gaje that so many world governments (including the United States) are clamoring to include this great system as part of their Homeland Defense. They recognize that Pekiti is as pragmatic on the “State” level as it is on the personal level when it comes to the defense of life and liberty.

While in the Philippines, I asked Sgt. Balthazar and several members of the 63d Battalion Force Recon Marines just how many of their encounters with enemy forces in the south necessitated the use of bladed weapons. The 63d Battalion sees more action in the southern Philippines than perhaps any other unit. They are lean, intense, and to a man have a 1000 yard stare that goes through you like an icy wind. Sgt. Balthazar enthusiastically replied to my question: “We have many, many fights against them with our bolos...and we always win because of the training Tuhon Gaje has given us!” Sgt. Balthazar is pound-for-pound one of the toughest human beings on two legs. He took a liking to my student Dean Hadin, and even presented him with a barong that had been “recovered” while on operations in Jolo.

Getting back to Maginoo Mandala Uli Weidle, he has a most unassuming demeanor for someone of his considerable skill level. I commented on that very fact to him, and he said reflectively: “In my experience with martial arts people, the more you claim to be, the less you really are.” How very true indeed.

The thing I like about the European school is that they're big enough to sponsor training if you become an instructor.