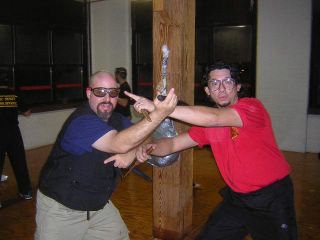 "It's All Fun Until Someone Loses An Eye!"
(Jeff & Doug doing some "Knife-Clowning")

Hosting a public seminar is never an easy task. Co-ordinating 3 seminars in two countries on the same weekend is a feat that most sensible people would not even want to attempt. I am proud to say that my friend, teacher, and mentor Guro Doug Marcaida of Rochester, New York did just that - and flawlessly - this past weekend.

The event began on Thursday afternoon with Guro Doug and Tuhon Gaje presenting a Pekiti Tirsia knife and gun seminar to SWAT groups from all over New York, including Homeland Security. Friday evening featured another well-attended civilian seminar in Rochester by Tuhon Gaje covering double knife and dumog.

On Saturday we were able to spend some quality time training with Guro Doug, literally picking up where we left off almost a year ago since our last Detroit/Rochester group training. Later in the day, it was off to Toronto where we were joined by the incomparable Guro Jun DeLeon in preparation for the final day of instruction on Sunday.

Pekiti Tirsia is experiencing a rebirth of sorts in the United States. Guro Doug is at the forefront of this movement, as it were. He has studied with the greatest of Tuhon's 1st generation students, and his high level of understanding and refinement allows him to distill the very finest wine from the grapes of Tuhon's extensive knowledge.

It was an honor and a privilege for my students and I to share some Silat Kuntau Tekpi with Guro Doug, as well as just to be a part of this outstanding event.

Maraming Salamat Doug.
Posted by guro jeff davidson at 6:25 AM

Look like you guys had a really great time...ahhh, how I wish I could have been there. Oh well, hoping to see all of you guys again soon!

We missed you Ka Jay. But we know you were there in Spirit. In fact, as we crossed into Canada, I could have sworn I heard your voice...